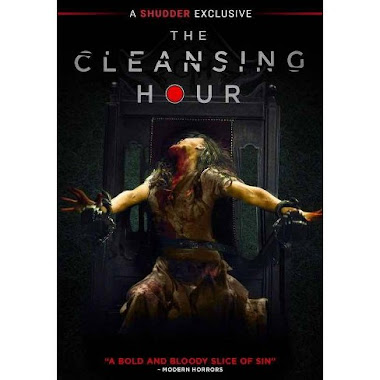 Max (Ryan Guzman) is a popular Internet priest that hosts a show called The Cleansing Hour. The problem is, Father Max is a phony, using his platform to make money from the show and his merch. Helping him is his best friend Drew (Kyle Gallner). One night Drew's fiancé Lane (Alix Angelis) is asked to sub for the actor being possessed on the live-cast. This live show goes smooth until a real demon takes ahold of Lane and the team must find their strength to defeat true evil. Damien LeVeck's second feature film is a mess but an interesting one. I will give the film a lot of credit it takes the concept of fame/money driven world of Internet content and folds in the aspect of religion which, with the rise of mega-churches (with their own merch) rakes in billions. And, I think for the most part this is a clever concept for the movie to hang it's hat on. Ryan Guzman gives a solid acting performance as Max. He really brings some pathos to a d-bag character. Kyle Gallner also is tasked with a lot of the emotional heavy-lifting and he delivers a gut-punching and believable performance. Alix Angelis plays both Lane and her possessed counterpart. She really handles this duel role well and, I`d argue has the hardest job acting wise. My biggest issues with this film is it never leans hard enough into the themes of Internet celebrity and also doesn't hit the comparison between some religious "celebs" making money to what Max is doing hard enough. This seems to be a huge missed opportunity. As steady as the story is, it does start to go off-the-rails at the midway point. I think what saves it for me is the movie has a certain sense of self-awareness. The movie while yes is earnest in it's story, still has some tongue-in-cheek moments. The finale is a bit out of left field however, it's fun, outrageous and also, showcases another element that I liked about this film, which is the effects. Outside of some dodgy CGI, the film showcases some great special effects. The last ten minutes really had me beaming with the film throwing some goopy, slimy effects. I need to keep this vague as I want to keep this totally spoiler free. This movie is a mixed bag due to some wildly uneven plotting, and some clichés. Max's backstory with a nun is kind of laughable and felt very out of nowhere. Not to mention some  cringe-worthy moments. The killing of a drag performer felt a bit yikes and needless. What saves the movie for me is it did try and serve up some thought provoking  elements and subvert some troupes (even though it leans into a lot of them as well). Overall, a fun enough watch but nothing that is mind blowing.

Picture: Currently in the US Cleansing Hour is on available on DVD. This is kind of a shame because the movie has some nice visuals and atmosphere. Having said that the 780p transfer is pretty decent picture wise. Obviously, this would be better on HD but the digital film still looks slick and nicely done even on this lower quality format.