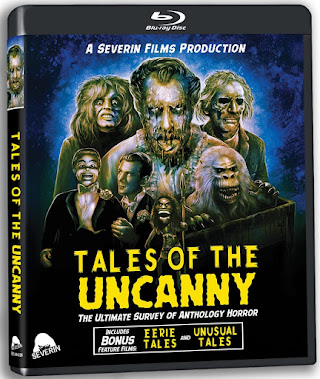 Disclaimer: Severin has provided me with a copy of this film free of charge for the purposes of review. All opinions contained within are my own honest reflections.

Tales of the Uncanny started life as a documentary on horror anthologies but, then COVID hit and put the stop on that. However, out of eyeballs you make eye jelly as, and thus the documentary took a slightly different turn. Instead Gregory gathers up legendary filmmakers/historians such as Rebekah McKendry, Roger Corman, Joe Dante etc to talk about their favorite horror anthologies and anthology segments. They also rank their favorite overall films and segments.  Gregory says at the start that doing the interviews via Zoom helped in a way because he could get more subjects. And wow. You really have to marvel at the variety of people from Eli Roth, Peter Strickland, Reece Shearsmith, Roger Corman is staggering. Sure, the video quality is what you`d expect but, honestly that didn't bother me in the least. Like all of Gregory's documentaries, he goes above and beyond to pull together such a vast and diverse group of experts. I also love the focus on the female perspective with Heather Buckley, Jenn Wexler and Maitland McDonagh just to name a few. Everybody that is interviewed is so engaging that you cannot help but hang on their every word. From a technical standpoint the film flows really well. It's broken up neatly into segments and offers up the history of the horror anthology from, 1919's Eerie Tales (included as a bonus) all the way through the through modern films like The Theatre Bizarre (2011) and XX (2017) . Also something that I've come to really admire about Gregory's films is he always gives his documentaries a nice visual punch. And, what I mean by that is it's not just a collection of talking-head interviews. But rather, we the audience are treated to a wealth of stills, posters and excellent transitions.  In terms of highlights, I loved the deep-dive into the British films specifically those produced by Hammer rival Amicus. Each decade and even horror themed shows are covered in a wonderfully comprehensive way.

As a horror fan I started out watching the HBO's Tales from the Crypt Series when I was 7/8 years old. Looking back it was the perfect starter horror for me, and not only allowed me to explore the horror genre in bite sizes but, it also primed me for feature length horror anthologies. After that it was Creepshow and Tales from the Hood on VHS and later the British anthologies. What I love about Tales of the Uncanny is how it perfectly touches upon how interesting, thought provoking and diverse horror anthologies are. David Gregory takes you on a bloody good journey through not only the history of horror anthologies but how they've impacted pop culture and the horror genre as a whole. A truly stellar film that should be considered a Must-Watch!

Picture: Tales of the Uncanny is certainly an outliner visually as the bulk of the interviews were recorded on platforms like Skype and Zoom. Thus, the picture quality varies. Though I think it overall looks good. As I said in my review David has a way of making his documentaries more visually interesting than just the interviews and the transitions and things like stills and posters look sharp in 1080p.

Sound: Tales of the Uncanny has a nice 2.0 track. Dialogue comes through nicely with no drop out issues.