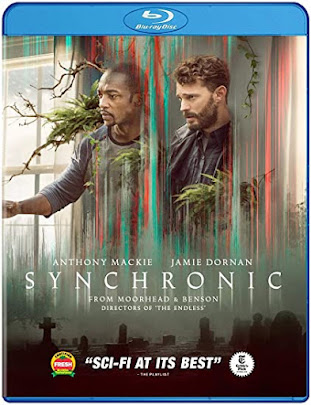 Having just come off amazing outings like Spring (2014) and more recently The Endless (2017) Justin Benson and Aaron Moorhead have proved that they can make a visually stunning, yet thought-provoking films. Now they are tackling more acid-like outings with Synchronic. Two New Orleans paramedics named Steve (Anthony Mackie) and Dennis (Jamie Dornan) encounter a series of strange deaths linked to a party-drug called synchronic. Two major life events such as Steve getting the news he has cancer and Dennis's daughter going missing kicks off a weird and world-breaking adventure.

So, I am somebody that loves really polished high-concept science fiction. Recent examples is 2020 Possessor and, of course I would put Synchronic neatly in that category. Benson and Moorhead hooked me right away with this mystery of young people dying horrible deaths. As the movie unfolds the movie cleverly morphs into a surreal and thought provoking mediation on life, death and the very nature of time. Here's the thing. I'm not the biggest fan of time-travel movies, yet, Synchronic does something really interesting with this premise that makes it feel fresh. Sure, it leans on short-hand science troupes however, the time travel narrative is really a McGuffin for the the profound things the filmmakers have to say about having meaning in life and doing everything you can to make what's left of your life count. On the fact of it it may sound pretentious but I think the filmmakers are able to hammer these core themes home with expertly timed emotional peeks without getting too cheesy or cliched. Anthony Mackie and Jamie Dornan are really amazing in their respective roles and, they are given enough space to shine on their own, but, also play off each other nicely. It helps that the filmmakers give them a lot of fleshing out. Visually the film is just breathtaking with polished CGI that works in perfect tedium with the story it's telling.  Synchronic is a trippy  high-concept sci-fi film with a real beating heart at the center.

Picture: Synchronic features a nice 1080p transfer. The visuals are vivid with colors that really pop and details in clothing textures, sets, locales and of course CGI rendering. Being a new film filmed in digital you of course are going to be getting the best looking transfer. It's a shame that Well Go didn't do a UHD version, maybe someday.

Extras: Synchronic has a vast array of extras. Highlights include a engaging commentary with the directors and producer. Also included is:

Making Of (15mins) A great making of with interviews with the cast and crew.

Previsualization (8min) The directors show some rare pre visualized scenes which act as a live-action storyboard.

Rounding out the features includes a teaser and original trailer for the film.