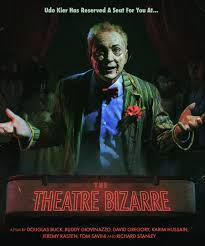 The Theatre Bizarre (2011) is a movie I have been in love with shortly after it came out. In fact, before I wrote my first book The Ultimate Guide to Strange Cinema for Schiffer I was shopping around a book on the making of Theatre Bizarre. I had archived rare photos, interviews but sadly I could not find a publisher interested in it.  I did keep a cool momentum, a DVD cover which I had signed by some of the directors and crew members. The film opens with a girl named Enola Penny (Virginia Newcomb) who seeks shelter in a old theater which she assumes is empty. Yet, Peg Poett (Udo Keir) is waiting on stage to present to her six tales of horror.

Much like Mick Garris's Showtime series Masters of Horror, The Theatre Bizarre brings together talented transgressive directors and allows them the creative freedom to craft their very own vision of terror. I will be reviewing each segment as well as the wrap-around segment. First let me talk about the excellent framing device directed by Jeremy Kasten. The movie is based off the Paris Grande Guignol which was known for brutal stage shows. Peg Poett, expertly played by the legendary Udo Kier makes for the perfect host and, the mini-"plays" that are performed on the stage that serves as intro's into each story is simply a stroke of genius.  There is more I could say about this framing device but I don't want to spoil it for anybody who has not seen it. This anthology really starts with a bang with Richard Stanley's entry Mother of Toads. Two tourist discover a mysterious woman named Mere Antoinette (Catriona MacColl) who entraps them in a web of occult horror. Stanley takes the typical horror troupe of two outsiders and blends a wicked sense of black humor, skillful direction and of course a surreal fever dream like quality. The director is no stranger to the occult and here he really taps into that with unnerving aspects. It very much put me in mind of a Tales from the Darkside episode with it's off-beat charms. Buddy Giovinazzo probably best known directing Combat Shock (1984) delivers a twisted love story in his entry I Love You.  A husband goes berserk after his wife lives him for his best friend.  You could easily say this is a pretty bare-boned narrative and, that it could have used a hook to give it an extra punch. And, you`d be right. However this is actually what I really like about it. Giovinazzo executes everything with this ice-cold detachment that makes for a chilling watch.  Tom Savini's directs the next segment Wet Dreams. Like Mother of Toads, this feels like a fun throwback to Amicus's anthology, yet done more gore and sexuality. It has a nice twist wonderfully bitter irony and, because its Tom Savini, features some nice gore and a wonderfully black humor. The Accident directed by Douglas Buck (Cutting Moments) is probably the most understated segment and, one that actually stuck with me for many years after watching. A mother explains death to her little girl after the witness a roadside accident.  Most may say it's not "horror" but, in my opinion it's themes of death reflects the most primal form of fear. This short has a chilling yet deeply moving and profound message and it's one that never fails to hit me like a punch to the face. Vision Stains the nice segment directed by Karim Hussain and tells of a woman that injects fluid of of peoples eyes and injects them into her own. This allows her to see the persons memories. She later writes down their story to preserve it. Stains works because it plays with some really interesting high-concepts whilst also offering a profound message in a non-pretentious way. This has some great shades of an early surrealist Argento outing with shades of Romero's Martin (1977). A scene with the syringe in her mouth is no doubt a wonderful nod to that film. The last segment is Sweets directed by David Gregory. Sweets is a candy-colored carnival of perversion that probably has the most obvert humor, albeit on the dark, or- bitter-sweet if you`d like. I love it all, from Estelle's (Lindsay Goranson) Siouxsie Sioux inspired look to the surrealist post-modern art style. This is truly an amazing work of surrealist cinema. It's really the high-note that this anthology needed. As I stated this has been a firm favorite of mine since it first came out and, it's pretty amazing to have over the years talked to a lot of the creative people involved with this film. In fact I will be interviewing director Douglas Buck so please stayed tuned for that. A fever-nightmare of perversion made by some of the most talented transgressive filmmakers of our time.

Picture: The Theatre Bizarre is a very visually provoctative film and I'm happy to say it looks great on 1080p. Shot on digital the movie has really transferred well and the end result is a crisp clear looking movie. Colors really pop, especially in Sweets by David Gregory.

Sound: The Theatre Bizarre has a really well done DTS 5.1 track. Dialogue comes through nicely with no audio drop out issues. I was really pleased that we got a 5.1 here as the sound design and score really benefit from this robust track. Also included is a English 2.0 and a French 2.0 track.

Extras: The Theatre Bizarre which was created by Severin founder David Gregory is rightly jammed packed with a treasure trove of features! The film features new commentaries one from 2012 and a newly recorded 2020 track. The real gem is of course Backstage: The Making of The Theatre Bizarre which is a feature length documentary covering every aspect of the making of the film.

French TV On-Set Report of Richard Stanley's Return to Genre Film (7mins) This fun and rare interview with Stanley on location during the shoot of Mother of Toads.

It also features two making of featurettes: Making of Vision Stains by Filmmaker Pat Tremblay and Making of The Accident by Pat Tremblay

These bite-sized interviews done for Shock Till You Drop are really entertaining and enlightening.

Boswell Scores An Interview With Mother of Toads & Vision Stains Sound Composer Simon Boswell (10min). A great interview with Boswell a legendary composer of such projects as Richard Stanley's Hardware (1990) and Danny Boyle's Shallow Grave (1994). Featuring some great behind the scenes footage.

Rounding out the features is Trailers for the film.