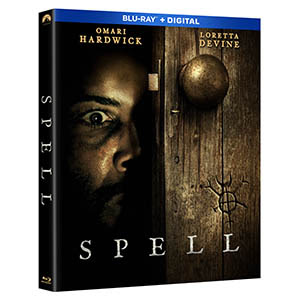 Marquis Woods (Omari Hardwick) is a wealthy lawyer with a wife and two children. After the sudden death of his father the family takes their private plane to attend his funeral but it ends up crashing in the backwoods. Marquis finds himself injured and being kept by a mysterious lady named Eloise (Lorette Devine). Spell is a movie that seemingly flew under my radar, but looked interesting enough to justify a watch. Director Mark Tonderai is more of a television director with credits like Gotham, Castle Rock and Locke and Key just to name a few. It seems like maybe he should stick to a short format as, Spell is a huge mess of a movie.

So, the movie starts off promising enough as it is atmospheric with some interesting narrative things going on. For example, Marquis overcompensates by spoiling his kids as a result of being the victim of abuse by his father is a storyline you rarely see. The film tries for this undercurrent of race and class divide as well.  Frustratingly, these elements are never explored or connected in a way that is truly effective, nor do they play a big part in the film. It attempts to makes you think it's giving you subtext when it is in fact not. But, I think my biggest issue is this movie is pretty similar to The Skeleton Key (2005). While that movie wasn't perfect it still delivered on a less-is-more stripped down chiller. Spell throws out this less-is-more and as a result it tries way too hard to throw every cliché in the book at you while never finding its own voice. It's a shame because, as I said, there are elements that feel like they could have worked had the filmmakers been more focused. What we get is a under-written, cringe-worthy at times horror outing that spirals into a mess of plot holes and eye rolls.

Picture: Spell looks great on 1080p. The digital covert to HD ensures we get a crisp image. This movie has a fairly well done visual style and this transfer does it justice. Skin tones are wall maintained and little details like set design and textures stand out.

Sound: Spell has a nice DTS 5.1 track. Not amazing but effective nonetheless. Dialogue comes through nicely as does music and sound design.