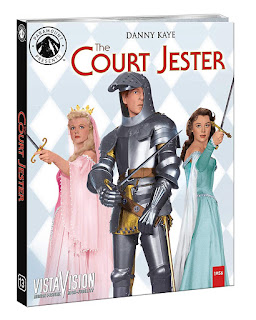 13 seems to big a lucky number, as the 1955 classic The Court Jester coming to Paramount Presents!! Hubert (Danny Kaye) is a awkward carnival worker who has to pose as a jester in order to seat the rightful king on the throne. The Court Jester (1955) is the kind of sweeping lavish Vista Vision production that, just a decade or so later would be totally out in favor for more counter-culture movies like Easy Rider (1969). Even though this movie was even out of vogue at the time of it's release it's been re-discovered as a true Hollywood gem, thanks to television airings and, of course home video releases. This is actually the first time I've seen this movie and, I must say the film is every bit as charming and fun as I had heard. This movie is a musical and, I think some films struggle to properly incorporate the songs into the narrative. Jester perfectly nails this element and not only are the songs catchy but they feel very organic to the story it's telling.  As for the film itself, it's a wild fun pop-art fairy tale-like send up of adventure movies. Yet, the movie never spoofs the genre, but acts as a earnest love-letter to the high flying, Errol Flynn type movies of a bygone era. Visually the movie is a brightly colored fever-dream that only Hollywood could conjure up. This movie was made for four-million which is nearly forty-million, it sadly was a risk that didn't pay off. I mention this because, they movie really does have this lavish over-the-top look. The costumes are amazing in there detail and the sets and locales give the movie a huge scope.
The writing is also a real asset here. Truly, we get some whip-smart dialogue that crackles and hilarious set-pieces that never fails to deliver the laughs. Speaking of, Danny Kaye is a scream as the titular Jester. Kaye was best remembered for films like White Christmas (1954) as well as heading his own show The Danny Kaye Show (1963-67) which ran for over one-hundred episodes. The crooner really had a ton of charisma and he brings that to every single moment in the film. This also features a fantastic supporting cast with Angela Lansbury, Glynis Johns and, of course Basil Rathbone who simply devours the role as the villainous Sir Ravenhurst. The Court Jester was a movie that really belonged in the '30's or '40's but, thankfully we got a big budget version as a last hurrah for the adventure films that died and later came back in the form of high-concept fantasy outings like The Lord of the Rings: Fellowship of the Ring (2001).  If you have never seen this movie and you are a fan of things like The Adventures of Robinhood (1938) you will really enjoy this film.
Picture: I know the year just started however, The Court Jester is already in the running for best restoration of the year. According to the Paramount press release:
For this new restoration, the original negative was scanned at 6k and one of the separation masters was also scanned and recombined with the negatives scans to address color fading in the negative.
The movie has a very vivid look with the colors being well-handled throughout. Grain is actually really well maintained which means the film elements must have been in good condition. Outdoor scenes have this lush, gorgeous look to it. I cannot over-state how fantastic the color grading and temperature is throughout. Clearly a lot of love has gone into the look of the film.
Sound: Jester features a robust DTS 2.0 track. Dialogue comes through incredibly well as does the music and sound design.
Extras: Court Jester features a brand new feature: Filmmaker Focus: Leonard Maltin Discusses The Court Jester. This is a very enjoyable deep-dive into the film, the filmmakers and the actors that bring this movie to life.