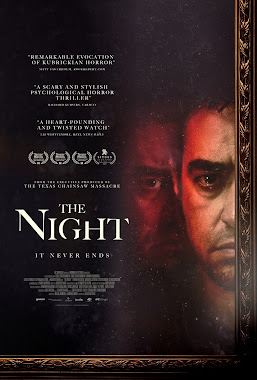 Disclaimer: IFC has provided me with a digital copy of this film free of charge for the purposes of review. All opinions contained within are my own honest reflections.

Real talk: 2020's The Night is a horror movie that will no doubt divide it's core audience and, might act as a Rorschach test. Some will see a terrifying exploration into the human soul while others will likely walk away confused. An Iranian couple living in the US named Babak (Shahab Hosseini) and his wife Neda (Niousha Noor) attend a dinner party held by other Iranian couples. Despite objections from his wife, Babak has some shots and some weed to take the edge off. The party winds down and Babak his wife and baby leave. After getting hopelessly turned around the trio spend the night at a hotel in order to get a fresh start in the morning. Things only get worse as the sins of the past haunt the couple in this spine chilling film. From the outset I wanted to give some context as to just why this is a important film. The Night is the first US production approved for commercial exhibition in Iran since 1979. From the outset director Kourosh Ahari is sly in how he presents the start of the film in a very normal, even inviting setting. Yet, even in this moment of normality something feels slightly off balance. Masterfully Kourosh only  amplifies this feeling as traps us the audience in a uncomfortable web of lies and secrets.

What's so interesting about this film is it very much plays with the haunted hotel clichés such as: loud banging at the door with seemingly nobody behind it, a very creepy hotel manager, old eerie music playing and, we even get a roaming black cat for good measure. But, as much as the filmmakers are leaning on troupes they are also wonderfully subverting them as. The movie isn't about a haunted hotel as much as its a couple haunted. Haunted by what secrets they keep from one another. Indeed, as pretentious as it sounds, being trapped in the hotel is very much a kin to being trapped in a loveless, tense filled marriage. The movie also smartly plays up how isolating it must be to be Iranian living in the US. Indeed, there is a moment that they fear they are being targeted by harassment and, when they seek the aid of the police they are only mocked. I also want to express how fantastic the leads Niousha Noor and Shahab Hosseini are.

I will say as brilliant as the film is its not without its flaws. The action starts to feel very repetitive and serves to slow down the tension and momentum that was crafted in the first act. Also, whilst I am perfectly fine with not getting answers to everything the movie presents, it's still frustrating when certain aspects of the plot that is seemingly important are glossed over or in some cases are only half explored or not at all. Of course, it's hard to go into specifics without going into full spoilers. I was also disappointed when the film did the loud noise in place of a jump-scare at one point. Overall, I think I was able to like the movie despite this because the movie kept me in this constant tense, off-balanced state. This is only the second film from director Kourosh Ahari yet, it feels like a film helmed by someone with decades of features under his belt. A chilling, unnerving exploration told through a cultural lens that we rarely get in horror. It's not going to be for everybody but, if you are willing to go on this journey, it's well worth it.