Giant from the Unknown (1958) The Film Detective Blu Ray Review 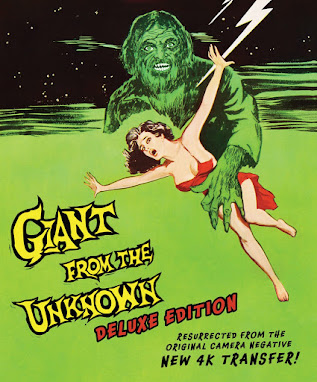 Often times horror fans will say that the '80's was the golden age for horror movies. Yet, we seem to ignore the fact that the filmmakers of the 1980's were inspired by the films of the '50's. Thanks to Film Detective we get a brand-new HD version of 1958's shlock-fest Giant from the Unknown. A large giant in unleashed in a small in this shoe-string budget monster flick. This is what is what Tom Weaver in his track calls a 'back-yard' horror film, which, as the title suggests is a low-budget film made outside of big Hollywood backlots and sets. Giant of the Unknown is basically a greatest hit's of '50's Drive-In era horror flicks with a big brute monster, a small town, bumbling cops, cheesy dialogue and a somewhat lumbering plot.
I had heard of this movie before as it was re-released on DVD in 2000 from Image Entertainment. But, this was the first time I actually sat down and watched this, once by itself and later with the commentary tracks. And, you know I wasn't too impressed my first time around however, after re-watching this I must admit it's a fun enough movie. This is by no means a good movie however if you are fond of so-bad-its-enjoyable and watch it with the right crowd, I think you`ll have a good time. Also, I will give the filmmakers credit for pulling off a lot of what they did on a scant fifty-four thousand dollar budget.  Clearly the filmmakers had passion for what they did and there really are some nice camera work, lighting and Buddy Baer is fantastic as the titular giant. The legendary Jack Pierce provided make-up late in his career which is also a highlight. Alex Glasser also provides a solid score. Richard Cuna made some other pretty infamous B-movies including She Demons (1958) and the laughably bad Frankenstein's Daughter (1958). I'm a sucker for any '50's era horror outing and, it's always exciting when a label takes a risk and puts out something like Giant from the Unknown. I think it's well worth checking out, especially for the MST3K crowd.
Picture: This film boosts a 4k transfer and wow, it's so impressive how good thing film looks. I was hard pressed to find any artifacts or scratches. Even grain has been smoothed out totally. The black and white image is well balanced and offers a pristine image.  I know it's early in the year but this may just make the list of best restorations of 2021.
Sound: Giant sports a nice 2.0 track. Dialogue comes through nicely with no hiss or background distortion. A really nicely done audio presentation.
Extras: The film has two feature length commentaries The first is with Historian Tom Weaver, included is some other guests. This is a great track for Monster Kids. Second commentary track is with Co-star Gary Crutcher.
You're A B Movie Star, Charlie Brown (14mins) Interview with Actor and Screenwriter Gary Crutcher. I really interesting interview with one of the few remaining actors from Giants from the Unknown. He also wrote the infamous Stanley (1972).  Candid fun stories abound.
The Man with the Badge: Bob Steele in the 1950's (9mins) Historian C.Courtney Joyner gives us a fun overview of Giant actor Bob Steele. Joyner is a really engaging historian and it's always great when he appears on a disc's supplement. I didn't know really anything about Bob Steele so I found this pretty interesting.
Rounding out the extras is trailer. Giant of the Unknown also comes with a booklet with an essay by Tom Weaver which is chocked full of great info.
Posted by The Video Attic at 11:34 AM