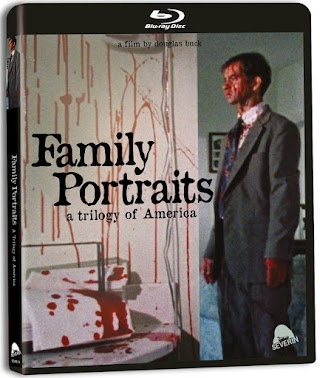 If you ever wondered what the closet thing to an American Jorg Buttgereit film, Cutting Moments and Home from 1997/98. would be it.  These films really have the oppressive feel, nihilism raw and brutality that makes for a pretty painful watch. The first segment in the trilogy, Cutting Moments is about a decaying family with a husband Patrick (Gary Betsworth) son Joey (Jared Barsky) and wife Sarah (Nica Ray). Whilst a numb Patrick watches TV downstairs, Sarah finds a sick way of reliving stress. Cutting Moments really should be touted among the best shock-cinema of the '90's. At the time horror  (Cutting Moment skirts the line of horror and drama, but for this lets just go with the former for now) with few exceptions was pretty tame in regards to really extreme gore-outings. This was long before A Serbian Film (2010) or even the August Underground series. But, I would say that Buck doesn't aim to shock just for shock sake and Moments really has a lot of say about the bleakness of, what can, from the outside seem like a great home life. Sarah is a kind attractive woman that is driven insane by how cold, unloving and detached her husband is. The gore, which is done by Tom Savini is of course extremely well done but, actually not that graphic. Having said that, Doug makes it so personal that you feel every cut. This is why I think its a brilliant movie. It's painful in a deeply human way and therefore it makes for a memorable experience. I would actually like to dive deeper but cannot due to spoilers. Maybe I will re-visit this one in more depth.  Next is Home. Home centers around a husband named Gary (Gary Betsworth) of a religious family who finds a way of dealing with his wife and daughters sins. At first this was a little confusing because I didn't realize that Gary Betsworth was playing a different character. Though it's not as strong as Cutting Moments, this entry has the same kind of isolation and creeping dread that made it spellbinding. It's also more complex story wise, opening things up to tell the story of a husbands abuse as a child and the echoes that it had on his life as an adult and now father himself. I think where this falls flat is that the drama and horror could have been pushed further and, I seems like Buck was holding back in a sense. Whereas Cutting Moments will stay with me for awhile, I dont think Home has the same kind of power. The final story Prologue which was released in 2003 and see's Billy (Sally Conway) who survived a brutal attack that resulted in losing both her hands. She returns to her hometown where she finally deals with who attacked her. Prologue is perhaps the strongest and my favorite story in the 'Family' trilogy. It adds more scope and depth coupled with a clear sense of Douglas growing a lot as a visual storyteller. The winter farmland is beautifully used is a metaphor for the isolation,  and overall bleakness of the characters world. Overall, each film has a refreshingly devastating, unnerving take on the family landscape. Though it may be a little bit slower paced than what most audiences may be use to, it's a film rewards your attention. Buck masterfully plays with gender, sexuality, perversion in a cutting edge way. A true work of dangerous art.

Picture: Severin has provided a really nice looking restoration here. The image has a nice clarity with fine grain that is consistent throughout. There are some artifacts in the print but honestly I think it only enhances the mood and feel of the film.

Sound: Family Portrait has a nice Mono track. Dialogue is clear and audio has no drop out issues or background distortion.

Cutting Moments Interview conducted in 1998 (47mins). This wonderfully candid interview, Buck explores the origins of the film, casting and filming. It also includes interview with Nica Ray, Gary Betsworth, Tom Savini and some behind the scenes footage.

Rounding out the Bonus is: