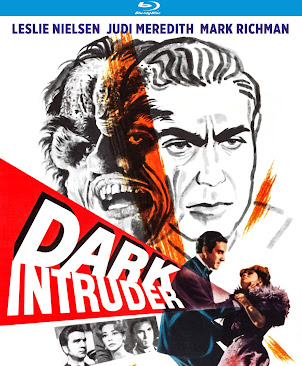 It's hard to believe it but, there was a time when Leslie Nielsen was more of a dashing leading man rather than the king of slap-stick comedy.  It might be up for debate but, I think that the modern horror film was birthed with 1960's Psycho and later cemented with 1968's watershed Night of the Living Dead (1968). Yet, despite getting some true gems like Peeping Tom (1960), The Innocents (1961) and Brides of Dracula (1960), the genre still was sometimes churning out pretty goofy shlock from this era. Such is the case with Dark Intruder from 1965. But, thats OK, we here at Video Attic love and celebrate the B-film. A detective named Brett Kingsford (Leslie Nielsen) starts to investigate a series of gruesome murders taking place. Each time a creepy idol is left at the scene of the crime. A far-out mystery unfolds in this off-beat outing. So, I'll be frank, Dark Intruder was a movie that on face value seems like a dud. However, I happily ate my words by it's short 60 minute run time. The film's biggest strength outside of it's leading man is how really interesting plot which has a heaping helping of occult horror with a sprinkling of an good old fashion Victorian turn of the century mystery. It's also extremely moody with tons of Gothic-Noir lighting and, wonderfully foggy London streets. Camera angles and framing are well thought out, something I wasn't expecting from a movie of it's ilk. Meanwhile, a monster prowls and, wisely we only hear the beast and see just fragments of him. There are moments when, similar to Cat People (1942) the roar fills the room, yet, we don't see the fiend. This creates some nice tension. The movie is a mystery, and it's engaging enough that I was never bored as it unfolded. Though, honestly the glue that ties this altogether is really Leslie Nielsen. It's hard to overstate the obvious but, wow, Nielsen really had buckets full of charm and, he really plays up this playboy detective to the hilt. The actor always plays the situation deadly serious and damned if you don't buy into it because he's such a good salesman. If I had to lobby a compliant it's that the movie could have used more polish when it came to certain narrative elements. Also, I felt that the movie could have used expanded upon, as it only clocks in at an hour. [Please note: Afterwards I learned this was actually suppose to be an hour-long television pilot]
And, when we actually do see the monster, its kind silly. Overall, this is a well shot, well acted horror outing that is dripping with haunting-Victorian era atmosphere.  Though it can get a bit cheesy Dark Intruder is a really a wild and engrossing little film. By no means a masterpiece it's still a worth a blind buy.
Picture: Dark Intruder sports a nice 2k transfer. The film really looks great. The image retains a great level of detail in sets, costumes and locales. The low-key Noir like photography is truly celebrated here. Grain levels are consistent and, I could not see any scratches and artifacts present.
Sound: Dark Intruder has a nice 2.0 track. Dialogue comes through nicely with no hiss or audio drop out.
Extras:  Dark Intruder has some nice features including a feature length commentary by Film Historian/Screenwriter Gary Gerani. Gerani provides a wealth of info. Like, I had no idea that Dark Intruder was actually meant to be a anthology with Leslie Nielsen detective character as a proto-Kolchak (long before that show). Gary is well researched and engaging. This disc also includes an interview with Mike Westmore, Makeup Artist and Bud Westmore's Nephew. Rounding out the extras are trailers for this film and others.
Posted by The Video Attic at 10:13 AM