Cinevangelist: A Life in Revival Film (2018) Plus My Meeting With George Figgs 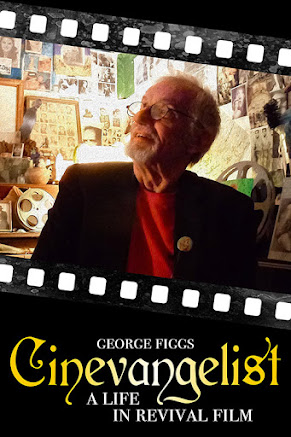 Disclaimer: I was given a free digital for review purposes. All opinions contained within are my own honest reflections.

Even hardcore underground film buffs will likely not know his name but, George Figgs is a legend that deserves to be a household name. Figgs was an original Dreamlander, having worked as an actor for John Waters from 1968-2004. He has also worked as crew on Serial Mom (1994), Pecker (1998), and Cecil B. Demented (2000).  Figgs is also an incredibly painter, film historian and, as Matt Barry's short doc explores a pioneer in revival cinema. This excellent short film Figgs discusses the part he played in revival cinema which he posits is in it's third wave. 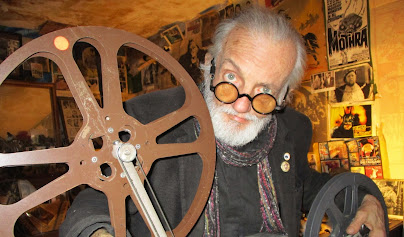 The film opens with a brilliant shot of Figgs walking through a darkly lit Charles Theatre (which I have seen movies at) and into the projection booth. This is where the magic happens and, Figgs acting as Svengali takes us through the process of projecting film and, later on his origin with cinema and the legendary Orpheum Theater.  George speaks with such passion and it's really easy to get swept up into his recollections. This is because Figg's is a fascinating person and, you cannot help but hang onto his every word. It's safe to say Barry truly knows how to put together a thoughtful and engaging short film with a subject that, in my opinion doesn't get the attention he deserves. Highlights include seeing Figgs memorabilia and remains of the theater like ticket booth and photos and a small home video from 1997 of the Orpheum. Its touches like this that make this a stand out. This was released in 2018 and flash-forward it's is a very strange time for the world but also, the entire state of cinema and theaters which is in flux. This documentary made me misty eyed for the excitement of seeing movies with a crowd. The Link to rent or purchase this is below and I think it's well worth checking out.

Meeting George:  I had the pleasure to interview Figgs a few years ago. In a rare opportunity I was able to (since I lived semi-close) interview him one-on-one rather than over the phone or Skype. Right as I entered his charming home I in utter awe of his impressive collection of film posters and memorabilia. I recall it being a very nice day and we conducted the interview on his porch which overlooked his small garden. There we talked about his work on films like Pink Flamingos and, somehow got on the subject of UFO's. It worth noting that this was in 2017 as I very vividly recall spotted three or four copies of Criterions Multiple Maniacs (1970) among his things. (I believe this was before it's official street date of March 21st). He gave me a tour of his home which was incredibly kind of him and there I got to see his paintings which are really stunning. I had seen some online prior so it was a real treat to see these up close and personal. As a film nerd I had him sign a Pink Flamingos repo poster which John had previously signed in person. Towards the end of our visit I recall him mentioning his son and that, quote (and paraphrasing) that, Maybe someday he'll realize his father is pretty cool. That stuck with me.

To Rent or Purchase this Film Click HERE (Please note: This will open in a new browser. It may not appear if you have pop-up blockers)