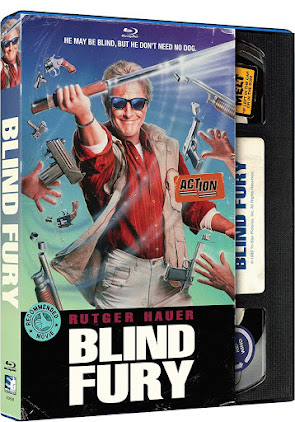 In 2019 we lost the screen legend Rutger Hauer. The actor had nearly two-hundred film and television credits under his belt and made such classics as Ridley Scott's Sci-fi Noir Blade Runner (1982) and thrillers like The Hitchhiker (1986). Blind Fury from '89 showcases the actors range for comedy, drama and, of course action. After losing his sight Nick Parker (Rutger Hauer) learns how to wield a sword through training. Now, he must save a fellow Vet and his son in this action comedy.
Blind Fury is clearly a American "re-imagined" of the old Zatoichi The Blind Swordsman, which was a series of movies and later a television show. If are you a die-hard fan of ultra '80's-90's action films I think you`ll have a lot of fun with Blind Fury. Director Philip Noyce proves he can juggle action and comedy which is something that is tricky. The fights and action set-pieces are well maintained and the humor, for the most part works to balance out the darker aspects of the plot. The movie also subverts tough-guy troupes when Parker tells the young Billy it's perfectly normal for men to cry, something that I thought was super progressive for an '80's action movie. Of course the films biggest strength is the star Rutger Hauer. This is a movie that relies on someone with presents and charm and Hauer has loads of both. It's great to see this actor showing off his wide range of acting skills. He easily sways from emotional, funny and bad ass. The actor has stated that this was his most challenging role as it required learning to wield a sword. And, I honestly think he's convincing with the weapon. This also features an excellent supporting cast with Noble Willingham and Randall 'Tex' Cobb really giving us deliciously evil characters. Where I think the movie struggles is finding a real emotional core. The film tries hard to connect with its audience on this level but it just comes off hammy and forced. As much as I cant fault a movie for wanting to add depth to its screenplay, in this case I would have liked Noyce to lean into the cheesy fun action. As far as the technical side the film looks great with Oscar nominated DP Don Burgess (Cast Away, Forrest Gump) giving the movie a huge look on a budget. J. Peter Robinson whose score everything from Wayne's World (1992),  Cocktail (1987) and New Nightmare (1994), adds a cool and playful score that is so wonderfully of it's time. Blind Fury isn't maybe as amazing as some had lead me to believe but I ultimately did have a good time watching it despite some so-so plotting and under baked emotional stakes. Hauer truly is a legend and, I think was a big part of why this movie is so beloved and endearing despite being a box office flop.
Picture: Blind Fury is looking sharp on 1080p. It's by no means perfect but its well above what you may be expecting. Mill Creek has really stepped their game up in terms of sourcing fairly nice transfers for their releases. Grain is smooth and consistent throughout. This transfer really shines in some of it's lower lit scenes which clearly benefit from this HD transfer. As I said in my review Don Burgess shot this film and, he would go onto shoot big budget films and still works in Hollywood. Burgess tight focus is nicely showcased here.
Sound: Blind Fury has a lossless DTS 2.0 track. Overall, this is a in my opinion a pretty robust and nicely handled track. Dialogue comes through nicely and, surprisingly the sound design really pops at certain moments in the film.
Extras: None
Posted by The Video Attic at 8:57 AM