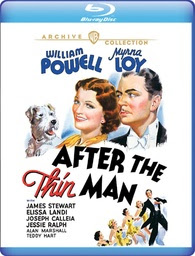 Based on the book by the same name, The Thin Man (1934) was a huge success with critics and audiences alike, making a nice profit as well as being nominated for Best Picture at the Oscars. It also helped further establish the careers of William Powell and Myna Loy, making them highly in-demand A-listers. It's no wonder that the studio was hot to follow up to ride the wave. Though, it would be two years until the famous sleuthing duo would return. After the Thin Man takes place shortly after the first film and see's Nick (William Powell) and Nora (Myrna Loy) taking a much needed break on New Year's Eve. The couple are swept up in a new case when a member of Nora's cousin's husband goes missing. Like the couple themselves the murder-mystery starts out at a rather casual pace, as Nick and Nora trade wry witty remarks whilst slugging down their weight in booze. However, once things get going the plot thickens with a ton of twists, turns and misdirection.

The screenwriting team of Frances Goodrich and Albert Hackett, who wrote the first Thin Man (as well as a slew of other hits) once again knocks this movie out of the park. Present is the wonderfully dry wit, banter and well crafted plot that made the first movie a true gem in early Hollywood cinema. I tried to keep the plot vague because there is so many moving parts and twists that it keeps you engaged throughout. William Powell and Myrna Loy obviously return and is of course poured into the role. The couple had made a total of fourteen movies together and it's easy to see why. Right along side Hepburn and Tracy or Bogart and Bacall they are among the most iconic duo's in screen history. It's truly magical to watch the two shine on their own but also play beautifully off of one another. It's also notable for being an early screen role for James Stewart (having been in only seven feature length films prior). In a rare move for a sequel, After the Thin Man made even more money at the box-office and, it would go onto to spawn a whooping five more entries, ending with Song of the Thin Man in 1947. Though each movie has it's own set of charms, this if often considered the highlight of the sequels. It's a really rare thing when the sequel to a fantastic movie is just as fantastic. Such is the case with After, which manages to somehow re-capture lightening in a bottle, and has been beloved since it's release.

Picture: WA has touted this as a new 4k transfer and, Wow! This black and white film really impresses with it's extremely well handled contrast. For a film that is over eighty years old the picture is pristine in it's presentation. Grain is well maintained and all artifacts and scratches has been cleaned up. Skin tones are well balanced and sets and locales really pop.

Sound: After has a nice DTS 2.0 track. Dialogue comes through nicely with no audio-drop out issues. Being an older film there are some hiss background noise but, honestly it's nothing that is extremely distracting from the film. Overall, its a well maintained track.

Extras: After the Thin Man has some fun supplements. Included is the comedy short: How to be a Detective, Classic cartoon short: The Early Bird and the Worm. Also included is a radio show program with Powell and Loy, Leo is on the Air Radio promo and original trailer.