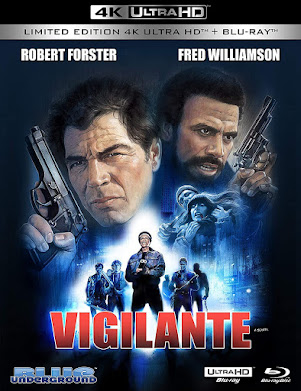 Full confession: Despite being a fan of Lustig's genre films which play like love letters to Grindhouse cinema his action-opus  Vigilante (1982) had somehow slipped through the cracks. Seeing how Blue Underground is giving the film a new UHD upgrade it seems like the perfect time to dive in. Eddie (Robert Forster) is a blue collar worker whose life is turned upside down when a gang of thugs kill his young son and brutally assault his wife Vickie (Rutanya Alda). To make matters worse the leader of the gang gets a suspended sentence thanks to a crocked judge and broken system. It's time to take matters into his own hands with the help of a vigilante squad lead by Nick (Fred Williamson).  Bill Lustig was a scrappy director that always catered to the kinds of movies he loved seeing on 42nd Street. When you sit down and watch a Lustig movie, especially his early work, you know that your in for a hell of a fun ride. You never feel cheated because these films have a rare kind of sincerity that you just can't fake. This is good to keep in mind with Vigilante which plays like a more gritty un-Hollywood version of Death Wish (1974). And you know what? The feel works damn well partly because of Lustig tapping into the right time and right place, namely a pre-cleaned up New York which thrives on lawlessness and corruption. This is one of the elements that I feel edges out Death Wish and other films of that ilk.  While the plot could have maybe used a tighter focus it never is boring and the action is nearly non-stop. The crowd pleasing gore effects really hold up well.
The late great Robert Forster makes for an incredibly relatable anti-hero. Thats the thing, you have to relate to Eddie or this entire thing doesn't work. Luckily the actor had a lot of charm and endearing qualities to get us on his side. Genre legend Fred Williamson with his cigar chomping swagger is of course always entertaining as hell. You have great supporting roles from Rutanya Alda (Mommie Dearest, The Deer Hunter) and Joe Spinell (The Godfather, Taxi Driver) who is perfect as the sleazy lawyer. Director of Photography James Lemmo really shots this movie in an interesting way. Lemmo was no stranger to making New York a character as he previously shot Abel Ferrara's seminal classic Ms. 45 (1981), and would later re-team with Lustig to shot Maniac Cop (1988), Maniac Cop 2 (1990) and Relentless (1989). The camera work captures the grime of the city but also his skill gives it a polish and scope that makes it feel like a bigger film. Vigilante is a kick-ass film that delivers on action, thrills and kills and, had some real talent to pull it altogether. Lustig perfectly tapped into this feeling of self-protection. In fact, two years after the release of this film Bernard Goetz would take the law into his own hands being dubbed The Subway Vigilante. If you, like me foolishly slept on this movie now's the perfect time to give it a watch.
Picture: Vigilante opens with a darkly lit scene with Fred Williamson and, right away I could tell that this UHD release was the real deal. Right away I could see that the color and clarity was stunning with the film retaining a lot of detail in locales, clothing, textures etc.  Grain is present but very smooth and well maintained. All artifacts and scratches has been scrubbed leaving a beautiful looking visual presentation.

Sound: Being an action film this movie thrives on it's sound design and score. Thankfully we get a great Dolby ATMOS track for this release. The sound effects and score really come through in a big robust way and adds a lot of depth to everything. The film also includes a 5.1 and 2.0 track.

Extras: As always this is loaded with features both old and new.

The New: The new features include a third commentary by Film historians Troy Howarth and Nathaniel Thompson. As always the pair are well researched and really entertaining to listen to. It's a commentary that is well worth checking out.  We also get two new featurette's:

Blue Collar Death Wish (25mins) This great featurette explores the making of the film with Lustig and the cast and crew.  Robert Forster is interviewed which, seeing how he passed away earlier this year makes it bitter sweet. It's great that we have not only his ported over commentary but now a fresh interview as well.

The second featurette is Urban Western Interview with Composer Jay Chattaway (25mins). The score of the film is fantastic so it's great to have an interview with Chattaway.

Everything is topped off with a Collectible booklet with a new essay by historian Michael Gingold.

Final Thoughts: Blue Underground is a label that has always been on the forefront of cutting edge home video releases. The fact that we have a UHD release of films such as Maniac, Daughters of Darkness and now Vigilante is really very awesome. You also have to give the label major props for not half-assing their UHD releases. Not only does the film look and sound incredibly but we get a brand new commentary and two stellar featurette's along with the older material. Vigilante is a gritty, take no prisoners' action film with an equally ass-kicking release. In my opinion its a Must-Own!