As noted: I am reviewing the Limited Edition UHD version. 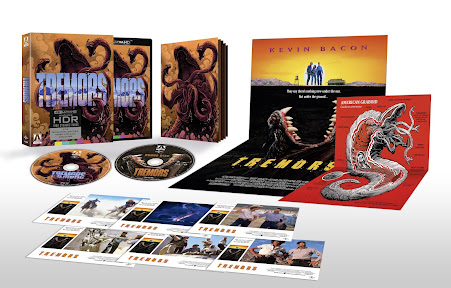 If Tremors and I had a relationship status it would be "Its Complicated". Allow me to explain. I always think of Tremors (1990) in the same context as I do with Phantasm (1979) which is: The first movie is a wildly original and interesting blending of genres that somehow works perfectly and came just at the right time and place. But, I just never got into the sequels and the lore that was added along the way. Part of me thinks I should give the sequels another chance and another part of me feels fine treating both IP's as their own special bottle films and not one part of a bigger universe. Valentine (Kevin Bacon) and Earl (Fred Ward) are two working class guys looking to brighten their horizons only to get trapped in a small town infested by underground creatures called Graboids.
1990 was a pretty interesting year for genre-cinema that pushed boundaries with Total Recall, Edward Scissorhands and Jacobs Ladder all creative films that somehow managed to get decent budgets and releases.  Tremors director Ron Underwood does some wild alchemy to pull off a creature feature with a western vibe, featuring richly developed and likeably characters and great effects all on a modest budget. On paper a throw-back monster movie with singer Reba McEntire, Kevin Bacon, the dad from Family Ties Michael Gross, shouldn't work but somehow against all odds it does. I think you can boil the success of Tremors in three core elements: Underwood gives us two relatable dim-witted heroes in Bacon's Valentine and Ward's Earl. Right from the start the pair are are so likable we automatically are on their side. Their present situation and wanting to get out from 'under' it also makes them relatable to a lot of people. The second is how the filmmakers can straddle a nice line between campy-b-monster movie and really incredible action-set-pieces and emotional stakes that feel organic and believable. The third is of course the Graboids which is such a stellar practical effects creation that I don't think gets the credit it deserves. And, thankfully the filmmakers don't show you the monster right away. Wisely we get a really nice build-up until a all-hell-breaks-loose reveal in all it's goopy glory. Underwood and S.S Wilson take what could be a very silly premise but with a polished script and an excellent cast we get a breathless action creature feature which I feel paved the way for, or rather ripped up the pavement for blockbusters like  Jurassic Park (1993). Despite only making 16 million on it's 10 million budget the film has found a loyal following spawning to date five sequels and a short lived television series. Bigger more successful movies released the same year are scarcely as remembered or enduring as Tremors. There is so much more I could say about Tremors but I feel like I've rambled or 'rumbled' enough.
Picture: UHD edition: Tremors was previously re-released in 2010 by Universal to lackluster results. Ten years later I am pleased to announce that the UHD release is truly a revelation. Right away I noticed the up-tick in color. The image retains a lot of detail and you can really appreciate the creature FX design. Grain levels are nicely maintained and kept to a smooth minimum.
Sound: Tremors has provided a 2.0, 4.0, and a 5.1. I`ll be talking about the DTS 5.1 track. The sound design, score and dialogue comes through in a nice robust way. This track in my opinion offers a complex sound experience that enhances the movie.
Extras:

Blu Disc: Feature Film/Extras: The following extras are included on both the HD version of the film and the UHD disc. Two commentaries (Both new) the first by Director Don Underwood, Brent Maddock and S.S Wilson. The second commentary by Jonathan Melville featured in Making Perfect and author of Seeking Perfection: The Unofficial Guide to Tremors.

Making Perfection (31mins)  This brand new documentary takes a look at the making of the film and its legacy. Includes cast and crew such as Kevin Bacon, Michael Gross Ron Underwood etc.

The Truth about Tremors (22mins) A new interview with co-producer Nancy Roberts. This candid look at the making of the film and just filmmaking in general.

Bad Vibrations (10mins) A new interview DP Alex Grusynski. Alex gives a fascinating look at his visual style and some of the inspirations that he drew for the look and feel of Tremors.

Aftershocks and Other Rumbles (12mins)  New interview with As. producer/second unit producer Ellen Collett. Collett talks about her time with Roger Corman and her work on Tremors and some of the challenges of the shoot.

Digging in the Dirt: (20min) The Visual Effects of Tremors A new featurette on the films visual effects with former crew members of Fantasy II Film VFX and 4-Ward Productions VFX. A pretty interesting history on the big FX houses and of course their work on Tremors.

The Making of Tremors (44mins) Vintage 1996 featurette. Anybody who reads my reviews knows I am a sucker for a good vintage featurette. This is a really cool one released six years after its original release. Some wonderful interviews are included.

Creature Featurette (10mins)  a complication of on set footage showing the making of the infamous creatures the Graboids. Again, I love on-set vintage featurettes. It offers fans a rare glimpse at behind the scenes footage.

Pardon My French! (16mins) A new complication of overdubs recorded for edited-for-network television. This is one of the fun features that Arrow provides.

Rounding out the features is: Electric Press Kit, Trailer gallery and image gallery

Blu Disc 2) This disc which is exclusive to the Limited edition features the following:

ArchLight Hollywood 2015 Q&A: To celebrate the films then 25th anniversary this Q&A hosted by Arclight Hollywood on Aug 25th 2015 features sixteen cast and crew members. Filmed from the audience by Tremors expert Jonathan Melville. You have the option here to select the Pre-Film Cast Q&A and the Post Film Crew Q&A or to Play All.

Gag Reel: This gag reel was for the wrap party. It includes the option to play with Original Audio or an Introduction and Commentary.

Packaging/Extra Goodies: This LE set is housed in Arrow's hard case and contains: a booklet, six cards and two posters.

Final Thoughts: Arrow has gotten into the UHD game like most labels have (expect oddly enough Criterion) and, they have been making great choices for which titles they are spending the money and time to give this treatment to. Tremors is a big bold monster flick that, while not very visually splendid affair it is one that thrives on it's effects and sound design. As I mentioned in my review of the picture, this really is a much needed upgrade to 2010's HD release. And, of course Arrow has flooded this with everything you`d ever want in terms of extras. If you are a fan of Tremors this is a release you will want to Grab hold of! Arrow has really out done themselves here.