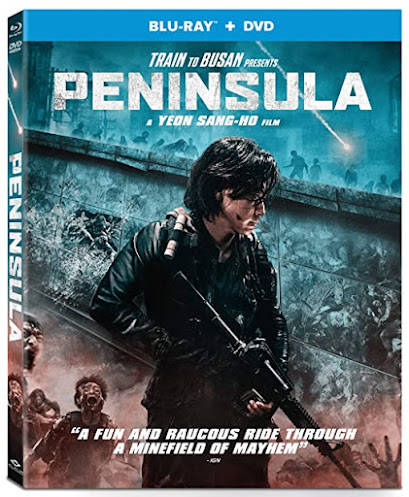 Zombie has horror movie fodder never truly dies, but, like any popular horror sub-genre they tend to go through periods of fatigue.  This was the state of things when Sang-ho-Yeon's Train to Busan (2016) burst onto the scene. It was a sleeper hit that quickly gained a huge following. So, when it was announced the director was doing a sequel, fans were understandably excited as hell. Taking place four years after the events of Busan a small crew including some familiar faces go back to the Peninsula to rob an armed truck with millions of dollars in US currency. And, as you might expect the plans go sideways as the infected are lurking around every corner.
I was really looking forward to this movie which promised to be every bit as great as the first film. Sadly though, it is not. I think the you can sum up the issues with the film in two major issues: One, the film tries to cram a lot of different elements into the story and I think the net result is a narrative that feels bloated and ultimately unfocused. We have this entire needless sub-plot in which a Mad Max style gang enters the conflict. It just feels so jarring and out of place. It's as if the director felt like the zombies weren't enough of a threat. Some of the action scenes also feel as if they are needlessly long. And, secondly the film feels shallow in terms of it's drama. The original Train to Busan was I think very successful in that Sang-ho-Yeon knew exactly how to hit it's emotional core. You really feel for these characters and their situation so, when somebody dies, it's like a punch to the guts. Peninsula tries to hit those same emotional highs but never actually does. I think that the bloated nature ends up leading to not having enough time to really connect with the characters. Laughably bad CGI doesn't help matters much either. So, since I always try to say something nice, the film does have a few enjoyable action-set-pieces (despite being drawn out) and I think there were some clever additions to the story like how the surviving people on the Peninsula have formed a new society. It's kind of baffling how the original director had four years between movies to craft a worthy follow up but seems to have missed the mark.
Picture: Peninsula looks great on 1080p. Shot on digital the film has a nice crisp clear look. The film retains a nice amount of detail, especially since the bulk of the action takes place at night. Skin tones are well balanced as is the color throughout.
Sound: Peninsula features a really well done Dolby Atmos track. This is a very action heavy movie (as if you couldn't have guessed) so it's great that we get a sound track that comes to life with big sound. Effects and sound design come through nicely as does dialogue.
Extras: The extras include: Making Of and Interviews: The Sequel (1mins)  The Action (2mins) The Director (1mins) The Characters (3mins). Rounding out the extras are trailers.
Posted by The Video Attic at 10:02 AM