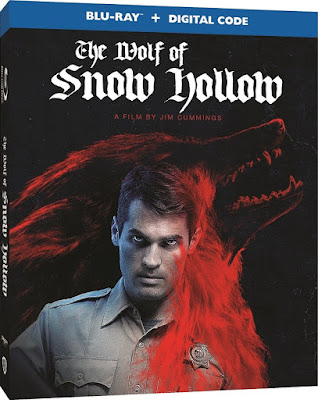 Disclaimer: Warner Brothers Entertainment has provided me with a copy of this film free of charge for the purposes of review. All opinions contained within are my own honest reflections.

Shortly after I posted that I would be watching Jim Cummings 2020 film The Wolf of Snow Hollow I got a flood of, "This is the greatest werewolf movie ever made", with one person even saying it surpassed Dog Soldiers (2002) in terms of quality. That's really saying a lot. I only mention this because expectations were fairly on the high side even before I popped the disc into my player. A tiny ski town is rocked by a series of ghastly murders. John (Jim Cummings) is an off-the-wagon sheriff heading up the investigation.  So, Internet hyperbole in the discourse of film is nothing new, but I try hard to ignore it and go into a movie with normal expectations. But yeah, I was excited because werewolf movies are rarely handled well. Typically for a review I will watch films twice especially if they have a twist or, I'm just kind of on the fence about it. The thing I noticed right away is that Jim Cummings understands the language of visual storytelling  and, the film is extremely well shot, edited (for the most part, more on that later), with a nice balance of dark humor and real emotional stakes. But...the film is not without it's issues. First off Cummings plays the lead role which is shall we say an interesting choice. Cummings is no doubt entertaining as hell to watch as our flawed hero. My issue is his performance sticks out because none of the other actors are matching his kind of big energy throughout. Yes, I know that contextually this makes sense for his character, but it's still jarring none the less. Odd things are scattered throughout like: characters will randomly look straight at the camera. The editing is fine expect for when the wolf attacks are intercut with a different scene effectively killing any tension or mood. It's a series of weird choices and, you know that's fine provided that you really establish this as a really weird world in line with a Quentin Dupieux film. In a Dupieux the world within the film has it's own logic which is often surreal and, even narratively follows it's own set of rules. Cummings goes out of his way to do the opposite. Everything is seemingly very normal and, even the small town seems pretty typical. It may have made sense to make this more akin to a Twin Peaks kind of town where it seems normal but everybody and everything is slightly off. I think its a real missed opportunity. In my opinion though I think the biggest issue is in the writing. Right off the bat the film has pretty clunky dialogue and scenes that don't move the plot forward. Snow Hollow feels like it sets up a whodunnit mystery, once again the filmmakers subvert that expectation, this time to it's downfall. Nobody discovers anything, there are no clues or real suspects sprinkled throughout. So, when we do find out what's going on it literally comes out of nowhere. Like, I cannot under-state just how out-of-the-blue the discovery is.
The film seems more interested in a story about a cop with anger/drinking issues learning to coup with job stress while also being a good father and letting his daughter grow up, which sort of mirrors his strained relationship with his daughter. And...you know you have grisly murders also taking place which almost feels like an after thought at times. Again this would be fine but Cummings doesn't connect these two threads together in a way that feels satisfying and organic. Snow Hollow also features some weird set up's and pay off's. For example, someone throws a beer bottle and, later on, laughably randomly and with no evidence John figures out who it is. Furthermore this bottle literally comes out of nowhere and by that I mean actually out of nowhere. In fact, the camera shots firmly establish this fact.
Again, if this was a Dupieux movie where the real-world logics is thrown out the window I might be more forgiving. This isn't a nit-pick, this movie is filled with these jarring plot holes, gaps in logic etc.
On the positive side Cummings is a damn good director and there are moments in the film that truly are well done, even inspired. I also love the dark humor which I think works really well. John's character has a really great arc throughout and, as I said above the there is a nice emotional core.
I have not seen his previous film Thunder Road, (2018) but I gather it has similar themes.  Natalie Kingston's photography is really amazing and I would not be shocked if she wins an Oscar someday. Ben Lovett provides a great understated score. I know this was a long review and, this is actually the parred down version. It's so baffling because you have a clearly brilliant filmmaker with a film that makes so many weird or odd choices with a narrative that could have used some work.
Picture: The Wolf of Snow Hollow is a really visually interesting movie and, this transfer really does a great job at highlighting that. The image is crisp and clear with skin tones that look natural. The film has a nice warmth to it and enhances the films atmosphere.
Sound: The Wolf of Snow Hollow has a really nice DTS 5.1. Sound design and dialogue come through really well.
Extras: Extras include some nice featurettes such as: The Impetus, Working with Jim Cummings, The Story and His Genre, The Design of the Werewolf.
Posted by The Video Attic at 8:02 AM