The Dark and the Wicked (2020) RLJE Blu Ray Review 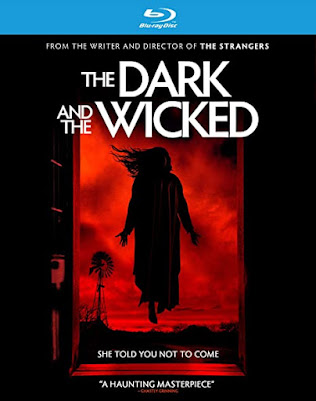 Writer, director Bryan Bertino is perhaps the most underrated director working in the horror genre. He came out swinging with his debut 2008's The Strangers and since has directed three other features including the sorely under loved The Monster which was among my favorite films of 2016. His latest is a Gothic horror tale that promises a lot of bare-knuckled chills. After their father is suddenly taken ill a brother and sister return home to comfort and help out their Mother. However, things go from bad to worse when the realize something else is walking among them. Similar to  The Wolf of Snow Hollow, this film had a lot of hype and Internet hyperbole behind it. In fact, a friend and fellow reviewer even called it the scariest movie he had ever seen.  While I don't think it's for me personally the scariest movie I've ever seen it was impactful nonetheless. What I enjoy about Bertino's work (note: I've never seen Mockingbird) is that he likes to strip the genre down to it's bare-bones and play all whilst audience expectations. I think I connected a lot with Wicked because I grew up in a rural area and, while it is beautiful it also has this quiet eeriness to it. It was easy for my young imagination to conjure all  kinds of horror's in the darkest parts of my PA homestead. This movie really taps into that in a way that few have. He achieves this in part with moody camera work. This includes off-putting angles, framing dark empty spaces which creates tension and using the desolate landscape to their maximum creepiness. The atmosphere works to really weave this dread-filled, tense experience of melancholic nihilism.  Narrative wise the film is also pretty thin, but I think, like the visuals, this works to the films favor (for the most part). Bryan is bold in that he doesn't spoon feed the audience story wise. The fact  that this movie raises more questions than answers is polarizing but, I personally find that way more interesting. It is certainly a film that I will be thinking about for a few days after the credits roll.

Marin Ireland (The Umbrella Academy) and Michael Abbott Jr (Loving) head up a stellar cast. Both leads feel like real people thrown into some incredibly messed up events. It helps that the dialogue sounds very natural and organic. I did have to put on subtitles though.  The film is great but I still felt like it had some issues. My main complaint is that the gorier elements towards the end tend to undercut the subtler aspects of the horror. And, you know, I don't have an issue with gore but, some of these scenes come off more silly. Also, the scene with dad doing a fast-mo. boo-type-scare is a prime example of when sometimes less really is more. In general I think the plot could have used some tightening. For example, while the icy detached worldview works in the films favor, I think that the movie could have used a stronger emotional center. I kept waiting for some flash-backs on just why the kids became estranged with their family.  Or just anything to get to know these characters a little better. I totally understand and even respect keeping a lot of things a mystery but I think in this case it would have made some elements a bit stronger.

The Dark and the Wicked is a film that only proves that Bryan Bertino is such an interesting voice in horror. No, I dont think it's the scariest film ever made but, it is, in my opinion well worth watching. Grim horror that crawls under your skin.

Picture: The Dark and the Wicked is, I think in part really successful thanks to its great visual design. This 1080p really showcases that here. Colors are well maintained throughout and small details really pop in HD.

Sound: The Dark and the Wicked has a really nice DTS 5.1 track. Dialogue comes through nicely. The robust sound in my opinion enhances the eerie sound design.

Extras: The extras include a Fantasia Q&A with actors Marin Ireland and Michael Abbott Jr.  (36 mins)