Directed By: Jeffery A. Brown 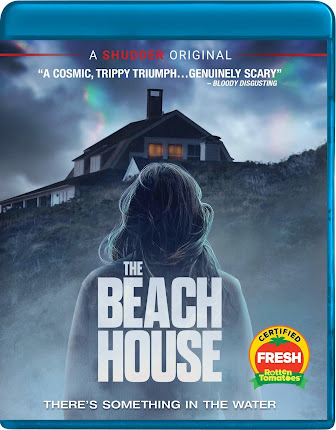 A few spoilers ahead! No spoilers for the end.

The Beach House makes the feature film debut of Jeffery A. Brown. The story tells of a young couple named Emily (Liana Liberato) and Randell (Noah Le Gros). They decide that their relationship could use some mending so, Randell suggests staying at his father's beach house for the weekend. What is suppose to be a weekend just to themselves it seems friends of Randell's family, Mitch (Jake Weber) and his ill wife Jane (Maryann Nagel) are being to be staying with them as well. And, things get weird from there. As I said this is the first feature from Jeffery Brown and, sadly it's a mixed bag at best. Beach House starts off well enough but its clear that Brown doesn't really know how to ratchet up the tension. For example, scenes like when Emily first discovers Jane in the house (she's a total stranger after all) should be a very suspense-filled moment, but that is quickly (and lazily) squashed. Characters make ever increasingly stupid choices and, as much as you try to suspend disbelief for film sake, some it the decisions are baffling boarding frustrating. This might be forgivable but the plot in the second and third act feels sloppy and aimless.

Brown swings for Lovecraftian horror but it does not work because it feels out of place and un-organic to the plot. What makes something like Richard Stanley's Color Out of Space (2019) work so well is, the cosmic horror elements feel properly set up before shit really hits the fan. Beach House on the other hand jarringly switches in both in tone and color palette into the third act and it feels like we are watching a entirely different film. Weirder still the film drops half it's characters by the hour mark. The best way I can describe the film is a series of interesting ideas that never feels like they thread together. Jeffery also wrote the screenplay and, I wonder had somebody helped him polish things up this could have worked. Because, I will say that though the set up isn't that clever I can see where Brown had good ideas and skill behind the camera. The horror elements seem to suggest a mixture of zombies, Lovecraftian cosmic mind-bender and a bit of Body Snatchers and The Fog thrown in for good measure. All of these ideas are battling and the end result feels rushed, messy and not very satisfying. On the plus side the direction I think is for the most part well done and Owen Levelle does a nice job as DP and, along with the trippy visuals gives the film it's most engaging elements. Again, to be clear I think Jeffery could be a great filmmaker given better more fully realized material. This is one beach house that looks appealing from a far but is a mess once you look at it up close.

Picture: Beach House looks nice on 1080p. Skin tones are very nice looking and the film though most likely shot on digital has a really nice looking film quality to it. Outdoor scenes really pop in terms of color and depth.