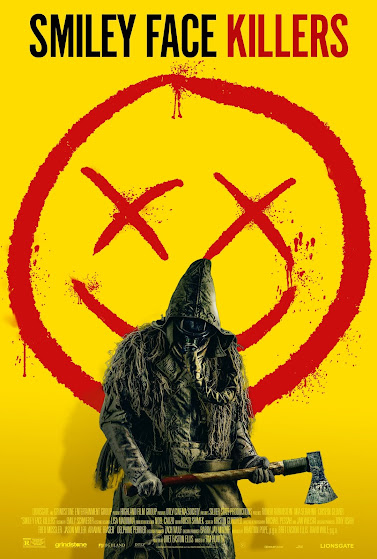 Disclaimer: Lionsgate Entertainment has provided a free digital copy free of charge for the purpose of review. The below review reflects my own opinions.
Plot Summary: As a strange wave of mysterious drownings of male college students plagues California coast Jack (Rubinstein) struggles to keep his life together at school. Finding himself stalked by a hooded figure in a van (Glover) driving an unmarked van, Jake fears he may become the next victim in the killer's horrific spree.

Tim Hunter's 2020 Smiley Face Killers is based an urban myth of young male college students that go missing, only to be found dead in a large body of water. The connection is some variant on the smiley face is found spray painted at the point of where the victim entered first entered said water. Foul play in these cases are largely dismissed but, like any good urban legend it cannot be proved nor can it be disproved. Fueling the theory is how some medical examiners have noted that the bodies look too pristine to have been in the water for so long. I've seen a documentary series about this topic so going into this I was well aware of this topic and, found it pretty fascinating. It was actually the main reason why I decided that, corny cover art aside I wanted to give this a watch. Sadly though, this movie is beyond terrible.

To say Smiley Face Killers feels like a CW or Lifetime movie might even be in insult to those companies. In proper edge-lord fashion Hunter gives us a nasty scene of animal multination which felt to me like a crude attempt to shock. The rest of the film is a very lukewarm film that could charitably be called a thriller. It's basically a teen-aged drama filled with bad acting, cliched plotting and shallow characters. Also, Hunter somehow sucks out all the tension right out of this movie. Seriously, its remarkable just how untense this movie is. Probably what is most disappointing is it takes a the blueprint of a very interesting urban legend and does nothing new or exciting with it. What the film should have done was frame the narrative around an investigation instead of a victim being our POV character. Because, I think what is so unsettling about the legend and what Hunter totally misses is, what's so creepy about the murders are they are seemingly random and sudden. So, the fact that Jake is stalked removes that aspect entirely. The one thing that is very remotely interesting about this film is it's over flowing with homo eroticism and, male nudity far out weighs female nudity.   To further hit to point home we have a needless male shower scene. Of course, the filmmakers do nothing note worthy with this subversion. The big "draw" is this was written by controversial author Bret Easton Ellis who is probably best remembered for writing the novel American Psycho, which was turned into the rare better-than-the-book film adaptation. Ellis has made no secret in interviews about his views on certain topics, notably what's wrong with "the youths" of today. Ellis sneaks some very pointed "digs" at millennials, despite that hot take having cooled down for some time now. And, you know if this movie was a sartorial dig on teen culture that might have been an interesting place to take it. But, of course he does not take it in that direction and so these scenes of mocking what is its basic audience and protagonist just comes off confusing.

If you`ve never heard of the supposed crimes in which this film is based, its worth checking out. This movie really embodies why horror movies still get a bad reputation from certain film circles. It's crass, its dull, gory for the sake of being gory and the plot and characters are beyond shallow. I seriously would have been upset if I had paid money to see this. Maybe someday, some filmmaker will make an interesting film on this subject.