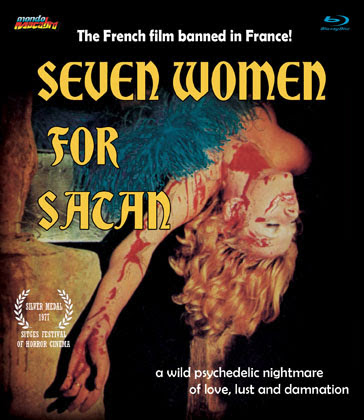 From the title you might expect Seven Women for Satan to be more akin to an occult sleaze-fest yet, the film is more of wonderfully nuts play on The Most Dangerous Game. For those not familiar (but you really should be), is a short story which tells of a rich weirdo who hunts people on his private island. It has been made into numerous films, mostly notable in 1932 . That film version was prominently mentioned in David Fincher's classic Zodiac (2007). A wealthy businessman named Count Boris Zaroff (Michel Lemoine) whose bloody daydreams and reality are starting to blur as beautiful women start dying off in this erotic-splatter flick.
Unlike the original source and film versions of The Most Dangerous Game this is a surreal take which doesn't take place on an island and, really strips the concept bare. And by strip bare I mean this movie is over flowing with this movie is over flowing with '70's era bare-flesh. This movie has enough sex and nudity that even the late-smut-king Russ Myers would have approved. Seven Women isn't what I would call heavy on plot, hell, one could argue it doesn't have much at all. But, you cannot say that this movie is lazy and the one thing that Michel does really well is capture a great deal of atmosphere. He achieves this with weird camera angles, spooky settings, and plays a lot with lights and darks. The whole thing has a bigger budget feel thanks to beautiful locales and, of course a perfect creepy castle. Yeah, I think you can nit-pick this movie for it's flaws and it does have those but, I had a lot of fun watching this very of-its-time baffling and at times pretentious French offering.  If you are expecting a ultra-gory flick this movie is pretty tame though it does offer some nasty surprises. Worth a watch for those into trashy, sexy Euro horror.

Picture: It's clear that Mondo put a lot of great work into restoring Seven Women for Satan. Overall the picture is stable, colors are vivid and mostly all of the scratches and artifacts have been cleaned up. Darker scenes really benefit from this new transfer. I think it's safe to say this movie probably never looked better.

Sound: Seven Women offers up a nice 2.0 track. Dialogue comes through nice and clear with no drop out in quality that I could detect. It's also worth noting this contains both the original French audio with English subtitles and English Audio.

Extras: As always Mondo has some great supplements including: Interview with Michel Lemoine (15mins) This was ported over from the DVD version. A really entertaining interview and, seeing how he passed away in 2013 makes for an important historical artifact for sleazy cinema fans. The second interview  Robert De Laroche (57mins) looks to be new and, though it's a long interview it really is a fascinating watch. Rounding out the features is a trailer and some deleted scenes.