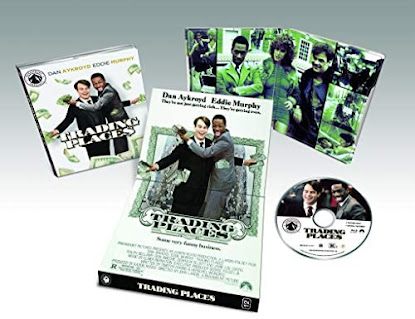 Much like 1986's The Golden Child,  Paramount Presents #12 is sticking with the Eddie Murphy theme with the 1983 smash comedy Trading Places. A snobbish upper class stock broker named Louis (Dan Aykroyd) switches places with a poor man named Billy Ray Valentine (Eddie Murphy), as per a bet with two old and eccentric millionaires.  Landis cleverly weaves a Frank Capra/Preston Sturges screwball comedy for the Reagan era.  It's interesting to take the ' ultra-excess and wall street carnage values of the '80's and mirror it with social/class struggle films from the Great Depression era.

I will say though, that as funny as the set up and second act is, I think that things start to unravel in the third act. My main thing is that Murphy's Valentine and Aykroyd's Louis never feel like they have any real meaningful character arc's, Louis never seems to learn that his actions in the beginning were rude, childish and Murphy too never seems to gleam anything new from his experience either. It's like a chunk of story is missing where the two come to some realization and mutual respect for one another. Instead it's: Bond over a common enemy.  ruin said enemies lives. Ride off into the sunset all whilst reaping the rewards of their misery. Yes, the two millionaires are terrible people but it seems like Louis and Billy are just as cruel. Honestly, how are they any better in the end? So yeah, the movie also alludes to social issues, class struggle and race, but sadly Landis never tackles  any of these subjects in a profound or challenging way. Again, yeah, its a comedy, but you can also be thought provoking.  And, any '80's movie wouldn't be complete without cringe-worthy things such as: racial slurs, homophobic slurs, sexual assault jokes, oh and lets not forget Dan Aykroyd in full black face. Yikes! I'm not saying your a bad person if you still enjoy this film I just I think it's well worth mentioning. Speaking from someone who is gay and have actually had these slurs hurled my way forgive me if I don't find them amusing. What I hate about these jokes are they are lazy (even for the time) and, merely rely on punching down on marginalized groups for cheap laughs. I think that so-called impeachable classics like Trading Places always deserves to be re-watched and re-examined. I will say that the acting is great and, its not lost on me this was Jamie Lee Curtis's breakout role that set her on the course to mainstream stardom. It's also great to see legends like Ralph Bellamy, Don Ameche and Denholm Elliot getting the lime-light they rightly deserve. They really go a long way to give the film the class it needs.

Probably one of the outliers but I thought this is an uneven at best film which works up until a point but, oh brother does it have issues. It's not even the fact that the movie is kind of cruel even from the so-called protagonists but, Landis had a chance to really say something here but takes the easy way around everything. But, the movie made a lot of money and, I would say is very much a product of it's time.

Picture: Trading Places looks really nice on 1080p. Grain is kept at a minimum and is consistent throughout. Details like sets, locales, costumes etc really pop out in a nice way. One thing I will give this film is it is well photographed and I think this transfer does it justice.

Sound: Trading Places has a really hearty DTS 5.1 track. Dialogue comes through nicely with no audio drop out issues.

New to this Blu Ray is: Filmmaker Focus: Interview with John Landis.