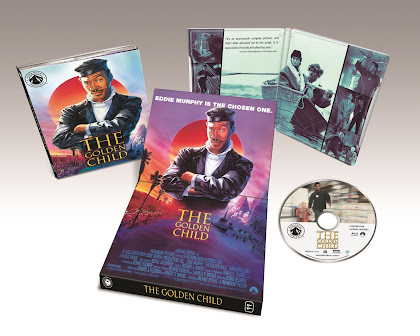 Paramount Presents #11 is sticking with the three other Eddie Murphy films that is being released from the studio this month. The Golden Child (1986) sees a detective named Chandler (Eddie Murphy) specializing in missing children hunting for The Chosen One in this fantasy film. It's interesting that this and Big Trouble in Little China were both released in '86. And, while Big Trouble had a smaller budget and was a failure at the box-office. On the flip side Golden Child had a bigger budget and was a hit. Yet, I think that over time Big Trouble has gained a big cult following while Golden Child seemed to have been relegated to '80's oddity.

At the time this was made Eddie Murphy was one of the biggest and most powerful actor in Hollywood. He was known for his 'edgy' comedy and of course, with that came pretty foul language and, Murphy rare pulled punches when it came to racial and homophobic slurs. So, it was a, shall we say interesting choice to put Murphy in the confine of a PG-13 adventure film. Surprisingly though I think that it's leading man is not the issue so much as the screenplay that sinks this film. A lot of the films comedy comes from the time honored cultural differences which is found in just about every buddy-cop or fish-out-of-water story. Murphy hams it up and mock's everything for most of the film which seemed alright at first but started to grate on me whilst he was doing this well into an hour into the film. Furthermore, Chandler (named after Raymond Chandler) doesn't really do a lot of sleuthing and, basically goes along with where the story takes him. Speaking of, the plot is so pretty much patch-work of other fantasy based films and, besides Murphy's colorful persona doesn't really do anything that interesting. This is where I think Carpenter's Big Trouble in Little China thrives as it not only is a fun fast action film but subverts tropes but also knows when to lean into them. I will say Golden Child some nice bits in it but I was kinda bored and, I think either your here for Murphy's brand of comedy or not. For this film I think I was in the latter camp. Speaking of actors the great Charles Dance (Game of Thrones) is an excellent baddie but, underused in my opinion. It's kind of weird the movie aimed for a PG-13 rating as its much more adult with casual swearing and graphic violence, and thats fine but the rating clashes with the tone you think it would be going for. If you are going to go for a darkly sardonic take on fantasy films, it should be R and really lean into it. Not a horrible movie as it has some charm but, overall I dont know if I'd rush to re-watch it any time soon.

Picture: The Golden Child makes its North American HD debut with this release. Overall I think it looks sharp and retains a great amount of detail in clothes clothing texture, sets and locales. Grain levels are well maintained and consistent throughout. Colors have a nice warmth to them. I will say that there are some moments when faces have a softer blurrier look which is a little distracting. Still, I think that this movie was no doubt never looked better and, barring a future UHD release, this is probably as good as its gonna get which is still very solid.

Sound: Golden Child has a really nice DTS 5.1 track. Dialogue comes through nicely and action scenes are sound design are highlighted extremely well in my opinion.

Extras: The disc contains The Making of The Golden Child (in HD) Broken into two parts (with a Play All option) The Chosen Ones (6mins) and Daggers, Design and Demons (6mins). Both featurettes are vintage Making of's and, regular readers will know I have a soft spot for these. I wish they could have got some new interviews with cast/crew but this offers a nice window into the production. The extras are rounded out by the original Theatrical Trailer.