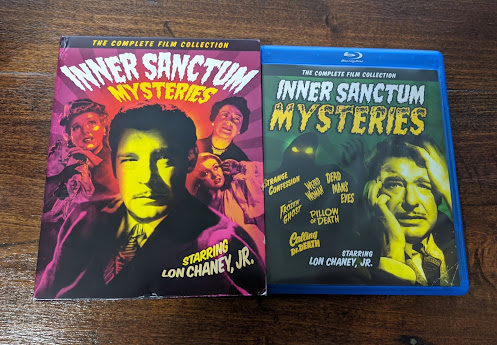 Disclaimer: Mill Creek Entertainment has provided me with a copy of this films free of charge for the purposes of review. All opinions contained within are my own honest reflections.

Notable for being the first Inner Sanctum Mystery, Calling Dr. Death finds Dr. Mark Steele (Lon Chaney Jr) under suspicion for the death of his cheating wife. So, not only is this the first in the ISM series but the first I had ever seen. My first impressions was: Lon Chaney Jr was an interesting but I think very solid choice for the role. Chaney may not be shall we say the best actor but, you cannot deny that the actor carried a certain swagger and suave that would be echoed in other noir-mysteries and pulp detective fiction. Though its worth noting that Bogarts Sam Spade had already made his debut in 1941's The Maltese Falcon which is consider among the first film-noir.  I digress. If you are looking for a hardened mystery filled with twists and turns and ultra stylized camera work and femme fatales you might be disappointed. Dr. Death is a very by-the-numbers mystery that has a few interesting misdirection's but at the end of the day not all that ingenious. Having said that the film is a lean paced (only clocking in at just over 60 minutes) and Chaney is really fun to watch. As I said the film while not the most clever does have a few tricks up it's sleeve and, overall its a fairly breezy enjoyable watch.

Picture: Dr. Death looks like it was sourced from a fairly nice looking print from Universal. The black and white photography is cleaned up with a great deal of clarity and detail. Blacks are deep and really well handled. The print isn't pristine and does have a few scratches and artifacts. Though, honestly for a movie that is over seventy years old it looks fantastic. Grain levels are actually really smooth and it doesn't have an over processed look in my opinion.

Sound: Dr. Death has a 2.0 track. Dialogue comes in nicely and no issues as far as drop out. There is at times some slight background distortion but nothing that even comes close to being distracting. Overall, like the picture it's a very nice presentation. Not flawless but very well done nonetheless.

Extras: Dr. Death has a Brand new commentary with author/historian C. Courtney Joyner and Regina Le Borg, daughter of director Reginald Le Borg. The film opens with a face in a crystal ball and Regina recounts that as a young girl this image haunted her dreams. This kind of sums of this commentary where Joyner and Ms. Le Borg have a candid and fun chat but, it's also filled with great information. It's such a delight to listen to and, if you are a fan of this series a real treasure.

A teacher and author Norman Reed (Lon Chaney Jr) falls in love with a mysterious woman named Paula (Anne Gwynn) whilst studying superstition in the South Seas. The two marry but Paula cannot shake her beliefs which results in scheme's and murder. 1944's Weird Woman, the second Inner Sanctum film is certainly starkly different from the first film. It deals with supernatural elements but, in good mystery tradition these are often misdirection's. Much like Dr. Death the twists and turns are very basic and, for true mystery-buff's I think they are a bit too simplistic to be effective. Having said that, I think Weird Woman is a breezy, bit of fun and the strange plot and finale, coupled with it's Noir-like atmosphere makes it well worth the hour-long watch. It was also fun to see The Wolf Man's (1941) Lon Chaney with Evelyn Ankers. Speaking of cast, classic Universal Monster fans will remember Anne Gwynn from House of Frankenstein (1944), also starring Lon Chaney Jr. Not the best plotted mystery but I was entertained nonetheless.

Picture: Similar to Dr. Death, Weird Woman looks great considering it's age. The print has a nice level of clarity and sharp detail. It's not without some scratches and artifacts however, it's certainly a much needed upgrade.

A artist named Dave (Lon Chaney Jr) is blinded by a jealous model and, a transplant is the only thing that will restore his sight. Murder and mystery abound. In my opinion Dead Man's Eyes is better in terms of a plotted mystery although it lacks the strangeness and playfulness of the other to outings. I think as for acting goes this has by far the worst with line delivery that is wooden and unnatural sounding. It's star Chaney Jr doesn't help matter's by playing every scene at 11. Speaking of, installment really doesn't give the title actor Lon Chaney much to do but yell and moan and shout the sometimes laughable lines he's given. As I said this probably has the better plot but the mystery itself is still on the simplistic side and true mystery buffs may not be too impressed. Overall, like the other films a breezy, sometimes campy sixty-minute film that is enjoyable enough.

Picture: Like the other transfer this one is really stunning looking. It's not perfect and still has some minor scratches in the print but overall it retains a nice sharp look. Grain is smooth and consistent throughout.

Sound: Dead Man's Eyes has a 2.0 track. Dialogue comes through clear with no audio drop out or unwanted background noise.

Disc 1 Extras: The Creaking Door: Entering the Inner Sanctum (17mins) Narrated by Martin Grams Jr. author and radio show historian. This is a really interesting history of horror/mystery radio programs and, of course, how the Inner Sanctum radio show fit's into all this. I love bonus features that add context to the main feature. When you have a moment it's well worth a watch.

Disc 2) The Frozen Ghost, Strange Confession, Pillow of Death
The Frozen Ghost (1945)
Directed By: Harold Young
Starring: Lon Chaney Jr., Evelyn Ankers, Milburn Stone
A mentalist named Alex Gregor aka Gregor the Great (Lon Chaney Jr) feels like he causes the death of a volunteer, and, soon finds himself wrapped up in a web of lies and murder involving a eerie wax museum. Taking a cue from 1933's Mystery at the Wax Museum, and, somewhat foreshadowing it's remake House of Wax (1953) this is certainly a standout film in the Inner Sanctum series. Much like the other entries the mystery plotting isn't what I call well done, however this entry has a lot going for it. Though nothing supernatural happens the film is very atmospheric and, I am a sucker for the wax-based horror subgenre. I also love seeing Chaney Jr and Evelyn Ankers (of The Wolf Man '41 fame) working together. Ankers as always dazzles and Chaney Jr though hammy, has a presents that is undeniable. I seem to enjoy the mysteries that lean flirt more with the horror genre without going fully over. One of the better films and Young does a nice job at directing this with some style.
Picture: Overall, Frozen Ghost is really sharp looking on 1080p. Clearly they sourced from a nice Universal print which retains a lot of fine detail. It's not perfect and does have some artifacts and very light scratches. but seriously this looks damn good.
Sound: Frozen Ghost has a nice 2.0 track. No unwanted background hiss or audio drop outs. A solid track.
Extras:  None
Strange Confession (1945)

A chemist named Jeff (Lon Chaney Jr) gets in a jam when his credit stealing boss Roger Graham (J. Carol Naish) releases a drug Jeff produces (without his knowledge) too early. Strange Confession is a oddity in the Sanctum series as, it's mildly interesting drama (though underdeveloped) but isn't what I would call a traditional mystery with a murder and suspects etc. This may have actually made a good ninety minute feature with a script over haul and, maybe a few cast changes. Speaking of, it kind of surreal to see Lloyd Bridges and Lon Chaney Jr working side by side and they make a pretty good duo. Supporting cast includes Brenda Joyce (best known as Jane in the Tarzan films), J. Carol Naish and Mary Gordon (Bride of Frankenstein). A decent potboiler but certainly an outlier in the series.

Picture: Again, Strange Confession seems to be source from a very nice print from Universal. The image is clear and retains a lot of great detail. There is a few flaws like some artifacts but nothing that is distracting in the least. A really nice visual presentation in my opinion.

Sound: Like the picture the audio is really well handled. Dialogue comes through nicely with no background noise or audio drop out.

Extras: Audio Commentary with Screenwriter Pete Atkins and author, screenwriter and historian C. Courtney Joyner. A fun, lively and informative track that is well worth the listen.

A lawyer named Wayne (Lon Chaney Jr) is accused of murdering his wife for another woman. Inner Sanctum's were non-horror but some entries flirted with the genre. Pillow of Death is probably the one film that goes the farthest into horror (but never does outright). Wallace Fox interesting plays the film like an old-dark-house mystery with supernatural pinning's that turn out to be very natural. I love how the film really leans into the spooky atmosphere and, really plays up the lavish mansion location. In terms of story the film isn't as developed as it could have been but, I still found it more engaging than some of the other entries.

Picture: Like the other films, Pillow of Death looks good on 1080p. Some slight artifacts and scratches but kept to a minimum and nothing that's distracting.

Sound: Pillow of Death has a solid 2.0 tack. Very little to no background noise or audio drop out. Dialogue comes through nicely.

Disc 2 Extras: This is the Inner Sanctum: Making a Universal Mystery Series (31min) Much like the previous bonus featurette on disc 1, This is Inner Sanctum is a really great supplement. Mark Jordan Legan TV writer and co-host of Films Freaks Forever Podcast, author/film historian Richard Heft, author, screenwriter and historian C. Courtney Joyner, filmmaker and historian Steve Latshaw, producer and film historian Michael Schlesinger, author and historian Justin Humphreys, TV writer, author Phoef Sutton  This is a great overview of the series with some great behind the scenes information. Really well produced and worth a watch. If I had to make a complaint it would be that they don't touch upon every movie in the series and I wish it would have maybe been longer.

Overall/Final Thoughts: I get frustrated when "fans" are quick to dismiss Mill Creek Entertainment as a sub-par home video label. Inner Sanctum Mysteries once again proves that the label is pushing themselves in the right direction. As noted in my break down the picture transfers are really stellar looking, especially considering the age of the films. Clearly, a lot of work was put into making these films look better than ever. Add some fantastic new bonus features from Bollyhoo productions and brand new commentaries and, you really have a great set. As somebody new to the Inner Sanctum movies I found them charming enough and, really, none of them are really unwatchable in terms of content. Universal Horror film fans will no doubt enjoy seeing Chaney Jr and Evelyn Ankers reuniting for several of these features. Again, just so this isn't misleading these are mysteries and not full horror (though some sort of flirt with the genre).  Included is a picture of the fantastic booklet included with this release. I also think the overall packaging is really well done.