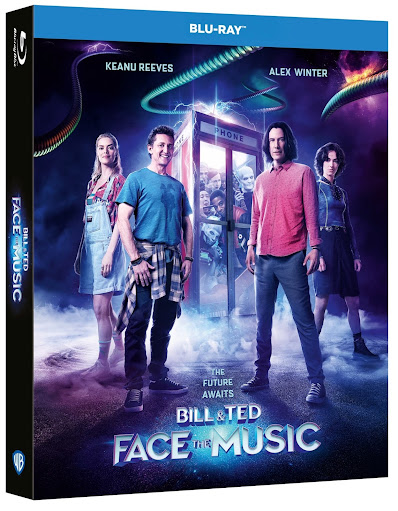 So, allow me to make a confess at the outset. I was never a huge Bill & Ted fan. Before you throw a guitar my way let me explain. It's not that I think the movies were bad, I suspect a lot of it was I was four when the first movie came out in '89 and six at the time of the sequel. The movies are clearly aimed at a much older audience hence, I never got that sweet hit of nostalgia that I'm sure a lot of people did going into this new outing. In fact, I'm actually pretty jealous that this movie never connected with me when I did age into them. Again, it's not a weird flex like I'm too good for the series, it's just they never made it into my film rotation back in the day.  The film cleverly starts with a recap of the events of the first two films and also what the duo has been up to since. It seems that their music career tanked hard and they are stuck still trying to find the music that will unit the world. Bill and Ted's daughters Thea (Samara Weaving) and Billie (Brigette Lundy-Paine) are now best friends and seem to mirror their dad's love of music. But also they seem to lack drive, seeing how both are unemployed but chasing a dream. However, time is literally ticking as the famous duo must write the song that units the universe or reality as we know it will cease to exist. Meanwhile, Billie and Thea time travel putting together an epic band of the worlds greatest musicians.

Director Dean Parisot is an interesting choice to helm this sequel with previous credits like Red 2 (2013) and the now cult classic Galaxy Quest (1999). And, you know what? Parisot may have cracked the code for an entertaining sequel. It nicely balances and plays with the humor that fan's loved from the first two films while also dealing out the references and homages that was expected. But, taking this a step further the film allows young star's Samara Weaving and Brigette Lundy-Paine time to shine in their very own side-quest that perfectly folds into Alex and Keanu's storyline. It's a passing the torch story that feels like it works organically. Visually the film is a treat and perfectly blends practical effects with digital. Alex Winter and Keanu Reeves have that chemistry that is the special sauce to the success of these films. They really hit the mark here and are a joy to watch at work. Samara Weaver who starred in one of my favorite films of last year, Ready or Not (2019) cements why she is an up and coming star. Not only does she totally connect and understand the character but, she adds a lot of personality and energy to the role. Equally good is Brigette Lundy-Paine and the pair really work well together. This also features an incredible supporting cast of William Sadler, Kristen Schaal, Anthony Carrigan. Bill & Ted Face the Music has landed in the right time and something as cheesy as "music can unit and save us all" is a welcomed bit of corny fluff. Charming, funny, sweet and with a message of, "Be excellent to each other" that is more important now than ever. Not being the biggest fan (and not hating it either) I really enjoyed this film. The tribute to George Carlin was heartwarming and did choke me up. Rock out to this solid comedy sequel.
Picture: Bill & Ted looks great on 1080p. It being a newer film it translates really well on the HD format. Picture is nice and clear without looking over-rendered. Skin tones look natural and colors are well maintained throughout. Outdoor scenes really look lush and vivid.
Sound: Bill & Ted rocks out in a stellar DTS 5.1 track. A movie like this clearly needs a robust soundtrack and the 5.1 in my opinion gets the job done nicely. Sound design, music and dialogue come through clear and sound great on a sound system.
Extras:  Bill & Ted fans rejoice as this disc has a nice array of special features starting with: The Official Comic Con Panel (43mins) This panel moderated by filmmaker  Kevin Smith. Filmed at home due to COVID the panel includes: Ed Solomon, William Sadler, Samara Weaving, Brigette Lundy-Paine, Alex Winter, Dean Parisot, Chris Matheson and of course Keanu Reeves. This is really a fun addition and of course you get a chance to hear the main players discuss the film.
Be Excellent To Each Other (1min) a short but fun featurette with the cast and crew.
Social Piece (Excellent) (.49seconds) Another enjoyable featurette with some new interviews.
A Most Triumphant Duo (1min) A short featurette about the casting of Alex and Keanu and Samara Weaving and Brigette Lundy-Paine.
Death's Crib (1min) A MTV cribs style look at Death's house featured in the film.
Posted by The Video Attic at 11:15 AM