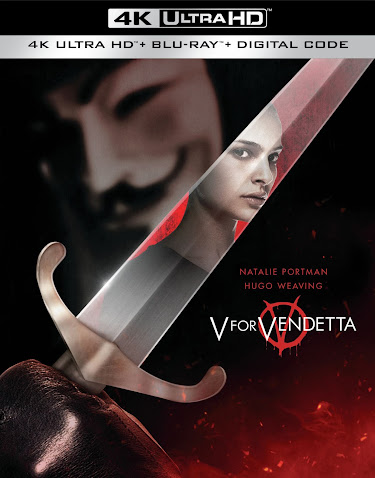 2005 was an interesting year for comic book movies. Miramax found a hit with Sin City based on Frank Miller's graphic novel and DC and Christopher Nolen Batman Begins breathed new life into the Batman franchise.  And, of course V for Vendetta. 2020 has been shall we say been a really difficult month and smack dab in a very heated political race brewing. It seems very fitting to re-visit this dystopian revolution film based on Alan Moore's groundbreaking graphic novel. In a near distant future Britain is ruled by a Totalitarian government ruled by Chancellor Adam Sutler (John Hurt) and his corrupt cronies. A Guy Fawkes mask wearing man known only as V (Hugo Weaving) plans to over throw the government with the help of Evey (Natalie Portman).
It's been actually awhile since I sat down and watched this film, in fact it's probably been a decade. It's interesting to see this movie now as an early comic book movie which does such an amazing job at understanding it's source material. Wisely James McTeigue gives this film the R-rated treatment and the film never feels like it's diluting or sanitizing Moore's vision. Visually the film is stunning and retains that very special comic book feeling that very few designers seem to get right. It's also one of those rare examples of how you can straddle that line between action escapism whilst also having a thought provoking allegory, even if that allegory is not very subtle. At over two-hours the film manages to be nearly breathless in it's pace and ever engaging. Couple this with great acting from Portman, Weaver, John Hurt just to name a few, an excellent score by Dario Marianelli (Darkest Hour) and photography by Adrian Biddle (Aliens, Thelma and Louise) and you have a great popcorn flick that inspires and excites.
Picture: V is such a visually stunning film and I'm here to tell you that this UHD transfer really gives depth and life. It's certainly a leap from the previous 2008 HD presentation and well worth the upgrade for picture quality alone. Details in set design and costume really pop and I'd wager that this new 4k has been archived using an original negative. Warner always honors their films and I haven't seen a single UHD release that I felt was lacking.
Sound: The UHD provides a nice Dolby Atmos track. The sound is incredibly life like and rather fitting for such an action packed movie. With this upgrade in sound it really offers a complex experience, especially for those with a sound-system that supports Atmos. It highlights Oscar winning composer  Dario Marianelli score beautifully.
Extras: V for Vendetta has a great array of special features. This includes Designing The Near Future (17min) a great vintage making of featurette on the look and feel of the film. Interviews include the director and various cast/crew. Remember, Remember: Guy Fawkes and the Gunpowder Plot (10mins) This really interesting deep dive into the meaning of Guy Fawkes day. As I history buff I found this to be a worth while watch. Freedom! Forever! Making of V for Vendetta (15mins) A nice in depth look at the making of the film from graphic novel to production. Interviews of course includes the cast and crew. Natalie Portman SNL Rap (2mins). A really fun and infamous Natalie Portman sketch, it has nothing to do with the film but its a great addition to this set. Rounding out the features is Cat Power Montage (2min) music video using footage of the film. Trailer and Soundtrack Info.
Posted by The Video Attic at 12:51 PM