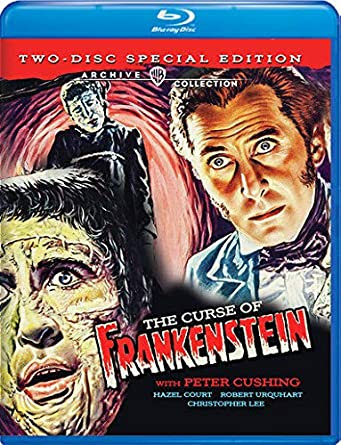 Disclaimer: Warner Archives has provided me with a copy of this film free of charge for the purposes of review. All opinions contained within are my own honest reflections.

If there was one classic horror film fans have been asking for over and over, it would be the original Hammer Horror outing The Curse of Frankenstein (1957). In this re-telling of Frankenstein Baron Victor Frankenstein (Peter Cushing) uses his lifelong obsession with science to create a perfect man. But, of course what he creates is a creature that lashes out on the towns people.  The film is considered groundbreaking for being not only the first color re-telling of Mary Shelley's Frankenstein but, it pushed the envelope in terms of blood. Now, its not to say this movie is ultra-gory but it certainly wasn't as tame as the other horror films released that year. My plot summary is kind of vague because I honestly find doing plot summaries tedious but also, because the films outline is pretty basic. However, thats not to suggest that the film is basic. And, I think in terms of quality TCOF holds up because of it's stellar screenplay by Jimmy Sangster, it's direction by Terrence Fisher and, of course the cast that brings it all together. Peter Cushing truly is among my favorites to portray Victor Frankenstein. No disrespect to Colin Clive who is dazzling in the role in Frankenstein (1931) but, for me Cushing injects more nuance and personality into the character. Whereas Clive's Frankenstein was a mad Doctor that spent too much time locked up in his windmill laboratory Cushing's Baron is charming and, thinks all of his work is for the greater good. And you have to talk about the Monster. Christopher Lee does a fantastic job with the role and, is also helped by some amazing makeup. In fact I think for my money it's second only to Karloff's in the original Universal cycle. Hazel Court, Robert Urquhart and Valerie Gaunt all shine in their supporting roles. On the technical side the film is beautifully shot by Jack Asher, who would go onto do a lot of classic Hammer films such as Dracula (1958), The Mummy (1959) etc. I wont go on about Asher because there is a feature on his talents that sums it up much better than I could. Curse also features a wonderful score by James Bernard who would also go onto do other great Hammer scores. And, as always Hammer's production designers create on a budget a world that feels real and lived in. This is an aspect of a lot of Hammer films (especially their period Gothic films) that just doesn't get mentioned enough.

It's funny how when I first saw this movie as a teen I didn't like it. After all, the monster doesn't show up into nearly an hour into the film. But, as an adult I of course realized this movies were never really about the monster but the person that creates them.  After that clicked for me I really was able to fully appreciate this movie. If you look at other movies that were released in 1957 you`d honestly be hard pressed to find one that has had this kind of shelf life. This is because so many talented people worked hard and brought to life a interesting and chilling re-telling of a classic in Gothic lit. If you are a lifelong fan this is the perfect time to re-visit this or, if your new it's not too late to see what all the fuss is about. I am a huge Hammer horror fan and in my opinion this is among their best efforts.

Picture: Curse of Frankenstein boosts a brand new 4k! I am happy to report that the movie has never looked better. The image retains a lot of detail whereas previous home video offer an image that is flat slightly muted. The uptight in color and sharpness really shows off the great production design and Jack Asher's amazing photography. Its cool that you get a option to play the film in either the 1.85 version or the 1.66. The second disc also includes the newly remastered 1.37 Open Matte version. All three formats are viewable for the first time in North American home video.

Sound: Curse of Frankenstein has a nice DTS 2.0 track. Dialogue comes through nicely along with Bernard's excellent score.

Disc 1 Features a new commentary with historians Steve Haberman and historian and filmmaker Constantine Nasr. Without a doubt among the best commentaries of 2020. Historian Constantine Nasr is able to get his hand on previous drafts of the film which offers some great new insights. And, as my regular readers will know I am a big fan of Steve Haberman. Both historians and fans will shine and the commentary is engaging, informative and never feels dull or boring. Really stellar stuff.

Curse of Frankenstein is FILLED to the brim with extras. Included on disc 2 is the following:

And a series of Featurettes (with a Play-All option)

The Resurrection Men: Hammer, Frankenstein and the Rebirth of the Horror Film (21mins)

Torrents of Light: The Art of Jack Asher (15mins) David J. Miller Cinematographer of Veep and The Good Place talks about Asher's work and career. Very insightful and interesting. Not just Curse of Frankenstein but Asher's other films are touched on.

Diabolus in Musica: James Bernard and the Sound of Hammer Horror (17mins) Christopher Drake Composer of The Dark Night Returns talks about Bernard's music work.  Again, much like the talk about Asher's work as DP this is an engaging and well researched deep dive in the work of James Bernard.

Rounding out the features is the original Theatrical Trailer

Over an hour of brand new features are included in this release! You really cannot ask for more.