The Controversial The Untold Story (1993) My Gore Coated Review 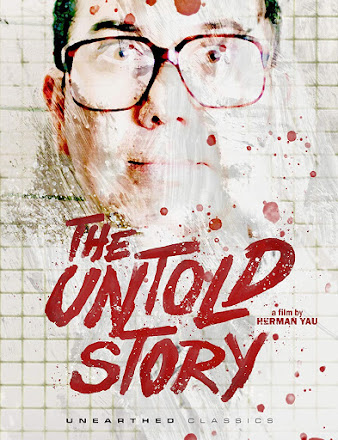 The Untold Story (1993) was a movie that I had often read about or, heard talked about in whispers. It was touted as this disturbing splatter flick and, for a long time it was kind of hard to get in North America. Before anybody, "Well actually's" me, I dont know the history of it's home video status in the US. I just know I personally had a difficult time finding a copy (also one not super expensive) so I ended up getting an import DVD so I could write about this film for my book The Ultimate Guide to Strange Cinema. The cops are looking for the killer of the former owner of The Eight Immortal Restaurant and his entire family. Their number one suspect is the new owner who just so happens to make the best pork buns.

There's no getting around that this movie is disturbing and yes, the violence is shocking, yet, I honestly think it's reputation for being nasty has maybe slightly outgrown how bad it actually is. The level of gore is tame compared to modern films yet Herman Yau makes the violence very personal and uncomfortable in a way most filmmakers don't dare. Also, the fact that children die in this movie breaks a taboo even the most hardened filmmakers rarely wouldn't.  As for is it actually a good movie? It's actually a pretty by-the-numbers detective story which only gets interesting when Anthony Wong injects his mad-cap magic into all of his scenes. As I noted in my original review (in my book) the film is sadly saddled with tone issues, mainly stemming from cringe-worthy and very dated humor from the male cops mostly directed towards a fellow officer who happens to be female. The "jokes" are wildly sexist, borderline homophobic and also feel like needless padding. It's the more subtle dark humor though, that in my opinion serves the film better. Despite this the film really is justified in a pulse pounding finale, as we finally build to the main murders that are hinted at the entire film.  . If you go in expecting something as unnerving as Men Behind the Sun (1988) or A Serbian Film (2010) I think you might be disappointed. It's raw and angry but isn't by far the most unsettling film I've seen. And, as I said in between the gore is a pretty standard even a bit hooky police story.

Picture: At nearly thirty years old The Untold Story in my opinion looks great on 1080p. Grain can be a bit heavy at times but honest that doesn't bother me. In fact, I like that grain film-quality and, it also means that original elements were used. It also doesn't look over processed hence it still has somewhat of a rough look to it. For this kind of movie though I dont mind it and I think overall it has a nice clarity and the best I've ever seen it look.

Sound: Like the image, The Untold Story has a really solid mono track. Dialogue and sound design come through nicely.

Extras I love when a video label truly puts in the work to put context behind their films, especially titles made in another country. Hong Kong cinema, more specifically genre offerings are a fascinating avenue to go down. I know that while researching and watching films for my guide I consumed a lot of Hong Kong flicks. Unearthed has provided a wealth of information if you are new to HK cinema. The Untold Story has not one but three commentary tracks 1) Star Anthony Wong 2) Director Herman Yau 3) Film Historian Art Ettinger and Bruce Holecheck. Each track offers a really refreshing insight and, though it took me awhile to listen to each and every one, it is well worth it.

The real gem on this disc is the feature length documentary Category III: The Untold Story of Hong Kong Exploitation Cinema (1 hour, 23mins). I am by no means an expert on Cat. III films so this was a really enjoyable watch. Not only do you have some great film historians giving a lot of info/context to these wonderful oddities but, you also have rare interviews with the actors and filmmakers from these films.  Seriously, this was such an engrossing feature. This no doubt took a lot of time and resources and could easily be a stand alone release in my opinion. First rate job.

Cantonese Carnage: An Interview with Rick Baker on Category III films. (13mins) Video Distributor Rick Baker (not the FX Master) talks about his relationship with the Cat. III films. It's a really interesting interview. Again, like the overview of Cat. III it offers a nice insight into Hong Kong cinema.

Rounding out the features is an isolated film score and trailers. It also features a booklet with great essay from film historian Art Ettinger.

Unearthed Video has offered not only a rare film in stunning HD but has packed it with amazing features. A Must Buy.