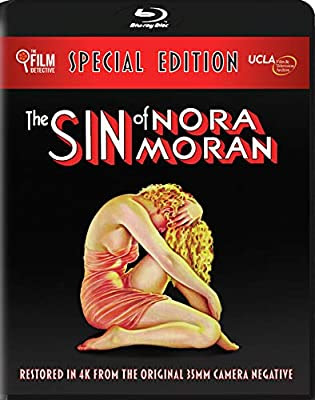 It's always really interesting to see Pre-Code films and how studios could push the boundaries of the art form. The Film Detective has provided a 4k restored print of The Sin of Nora Moran from 1933. Nora Moran (Zita Johann) is awaiting her execution for the murder of a man. But there seems to be more to the story in this drama.
Nora Morgan is, when boiled when down a pretty-by-the-numbers melodrama yet ,the screenplay and directing offers a few interesting tricks up it's sleeve. The first is that the film goes through different character points of view, and, these flashbacks tell the story in fragments. Nora's flashbacks come in the form of fever-dreams while she awaits her execution. It's here we get her side of the story but also surreal images in the context of her dreams. Also, Philp Goldman film's what basically could be a stage play yet gives it a lot of flare. He does this with interesting camera tricks and angles as well as over-lapping images. I will say if I had to lobby a complaint the film is certainly more style over substance, which isn't bad per se but the narrative I think suffers. Because we get different points of view on the murder it tends to get a bit confusing. The doe-eyed mysterious looking Zita Johann, best known to horror fans for her role in the original The Mummy (1932) plays the titular role. Johann was not only a good actor but had such a far-away exotic look to her. One cannot help be spellbound by her. Nora Moran is a very interesting film that has a very provocative visual style and this helps gloss over a so-so plot.

Picture: Nora Moran is sourced from the original 35mm print and re-mastered in 4k by UCLA. As a film buff it's always amazing how someone can take a movie that is nearly one-hundred years old and make it look almost brand-spanking new. Overall, there is a nice depth of detail and clarity considering the films age. There are some scratches and a few artifacts but, nothing too distracting and, I'm sure it's a huge improvement on previous prints. As I said this film has a refreshing and interesting visual style and this print really celebrates that.

Sound: Nora Moran has a nice 2.0 track. The sound is overall well maintained with no issues by way of audio drop out or unwanted background noise.

Extras: Sin of Nora contains: The Mysterious Life of Zita Johann (17mins) This featurette is about the life of Zita Johann as told by filmmaker and film historian Sam Sherman. This is a really interesting overview of Johann career as well as the film Nora Moran. Also includes a booklet with an essay by Sam Sherman.