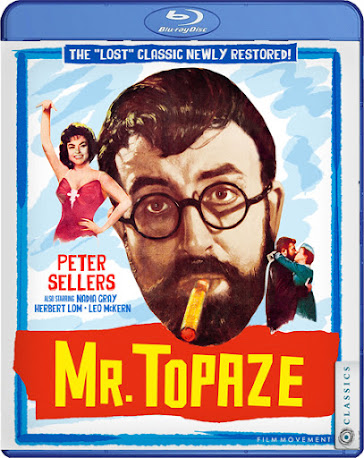 Trigger Warning: This movie briefly touches upon the subject of suicide, though never depicted.

Before he donned the mantle of worlds greatest detective in The Pink Panther (1963) or crafted the iconic and aptly named Doctor Strangelove, for Dr. Strangelove or: How I Learned to Stop Worrying and Love the Bomb (1964) the brilliant Peter Sellers starred and directed  1961's Mr. Topaze (later retitled I Like Money in the US) which is based on a popular play. Mr. Topaz (Peter Sellers) is a meek mild mannered teacher in a small French town. The problem is Topaz is honest and is fired from his job when he refuses to give a passable grade the student of a wealthy Baroness (Martitia Hunt). Soon however this teacher will be tested when he is offered the chance to front a shady business.

Before I dive into my review I feel like a little backstory on this film is in order. Topaze is an oddity in Seller's resume as it is his first and only feature length directorial effort (though he is said to have directed the bulk of 1980s The Fiendish Plot of Dr. Fu Manchu) from the comic actor. The film itself had gone missing for years, with avid film buff's wanting a chance to see it. Rumor had it Sellers himself was at the root of it being hard to find, in fact, legend has it he even attempted to destroy every print. As luck would have it the BFI was in possession of a copy and, through painstaking time and resources has restored it to it's former glory.

Right off the bat I was curious why Seller's loathed this movie so much he wanted to bury it. Though its not nearly so bad I would think it warrants being kept under wraps I can see the rough edges. These rough spots are most likely the result of a first time director getting carried away and cramming in a lot of needless filler. This was also Pierre Rouve's first screenplay (the first of only four total). It's really strange how the film is an hour in until it finally gets to what feels like it should be the start of act two. Again, this stems from Rouve and Seller's not streamlining the plot in a more economic sense. Indeed, scenes seem to go on way too long and the film is in need of a much stronger focus. The one bright spot is the actors. Seller's as always gives an effortlessly endearing role as Topaz and it's easy to see why he would go onto craft such iconic character roles. The film is also filled to the brim with great character actors like Nadia Gray (La Dolce Vita), Billie Whitelaw (The Omen, Hot Fuzz) Martita Hunt (Brides of Dracula, Bunny Lake is Missing), and Michael Gough (Batman) in a very fun and playful role.  It's also fun to see Seller paired with Herbert Lom. Lom of course would re-unit three years later with Sellers to play Cousteau's long suffering nemeses Commissioner Charles Dreyfus and would do so for the rest of the Panther series.  The film has it's charms largely thanks to Seller's how truly magnetic he was as a performer. Without spoilers I'll just say this film features a character arc that was rather shocking and refreshing. As for a director, well....I dont think this movie is so bad I would have buried it, it just lacks a tighter act structure. It might be also worth noting that the gender politics are shall we say pretty cringe-worthy as times as well. Overall, it's a movie worth watching if only for Sellers and all the other stellar actors.

Picture: The following statement is provided in the booklet in regards to the transfer:

Mr. Topaz has been scanned and remastered at 2k by the BFI National Archive from one of the few film elements known to exist and held by the BFI: A 35mm theatrical print. It is presented in its original theatrical aspect ratio of 2:35. Unfortunately this rare element has suffered from cyan and yellow layer fading which has lead to magenta bias in the color palette. Every effort has been made to minimize the magenta bias but unfortunately the image inevitably has a somewhat desaturated appearance. The optical audio track from the same 35mm element was scanned and remastered by the BFI National Archive.

This is interesting as in my first impression was this had a pretty interesting color scheme. While yes the colors are somewhat muted it for me doesn't detract from the overall film. Clearly you can see that a lot of effort was put into cleaning up any dirt, scratches or artifacts from this print. The end result is a sharp and clean image and in my opinion this is the best this film will probably ever look.

Sound: Mr. Topaz has a nice 2.0 Mono track. Dialogue comes through very clear. No background hiss that I could hear and no audio drop outs. Overall, a very nice sound presentation.

Extras: Extras include: Abigail McKern remembers her father, Leo McKern (20mins), The Poetry of Realism (13mins) Film Historian Kat Ellinger provides a fantastic video essay on Marcel Pagnol the playwright of Topaz. Lets Go Crazy (33mins) a short film starring Peter Sellers. This rare short really showcases Seller's who plays a variety of roles. It has been restored by the BFI. A really stellar addition to this disc. Rounding out the features is a trailer for Mr. Topaz. Included is a supplemental 24-page booklet that provides some insight into the rediscovery of the film by BFI curator Vic Pratt and features a new essay by Roger Lewis, author of The Life and Death of Peter Sellers.

Overall/Final Thoughts: Mr. Topaz is certainly an interesting artifact in Peter Seller's career. Therefore, I think its an important film to have preserved and made available to the public. Though I thought the movie was a bit shaggy in places I was totally entranced by Seller's as well as the amazing supporting cast. It's well worth seeking out especially at just 19.89 on Amazon. As far as value, the disc is packed with extras and, in my opinion you get the biggest bang for your hard earned buck.