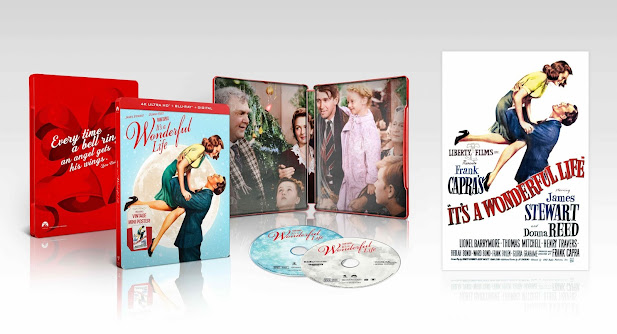 Trigger Warning: It's A Wonderful Life deals with themes of depression and suicide. I know this can be an upsetting subject but it's hard wired into the basic plot.

You would be hard pressed to come up with a more iconic Holiday movie than Frank Capra's 1946 film It's A Wonderful Life. Indeed, it's hard to believe that the film was not a big hit at the time of it's release just barely earning back its 3.18 million dollar budget. However, as fate would have it, a whole new generation would come love this film all thanks to television re-runs and later, various home video releases. And speaking of home video, Paramount has decked out this classic film in all it's UHD glory and wrapped it up in a sleek Steelbook. It also includes a mini re-production of the one-sheet. I can't imagine everybody's not familiar with the plot even just through cultural osmosis but: The film revolves around George Bailey (James Stewart) an man wanting to escape his small town to seek adventure. Through a series of tragic events however, George must put himself last and focus on what's good for his town, family and friends. One of these duties is to take over the bank left to him by his father. Scheming to take down George and amass power in the town is Mr. Potter (Lionel Barrymore), one of the all-time great screen villains', played brilliantly by Barrymore. By mistake Mr. Pottery gets ahold of a large sum of bank money (and essentially keeps/steals it). Now with this money missing George faces serious worries and possible jail time.  Fearing the worst, Bailey goes to a bridge one snowy night to do the unthinkable and jump. An angel named Clarence (Henry Travers) stops him and shows George what life would be life if he was never born. George learns that his life had a greater impact on his loved than he ever realized.
It's actually kind of hard to express in mere words how amazing and timeless Frank Capra's It's A Wonderful Life truly is. It's profound message of every person making an impact on other people's lives is one I carry throughout my life.  Indeed, it's a movie that, as corny as it sounds, helped shape me as a person. Wisely, Capra take's his time and, by way of  flashbacks give us a lot of depth to George Bailey and in doing so, masterfully and organically set's up the emotional stakes. And, boy, oh boy, does it pay off in the finale. Seriously, I think you have to be dead inside not to feel anything by the end. This is because the journey Capra takes us on is so rich and meaningful that the finale packs that punch. The town and the characters all feel very real and, from a technical level, the film is a marvel of Post-WWII cinema. James Stewart is ideal for this role and this is rightly considered his best and most iconic performances of his long career. Donna Reed, Henry Travers and Lionel Barrymore all add something incredibly special to the film. Not to mention an amazing supporting cast including Gloria Grahame (in only her second feature film role), Thomas Mitchell (Stagecoach, Gone with the Wind) and Beulah Bondi (Mr. Smith Goes to Washington). This film also features Carl Switzer better known as the original Alfalfa from The Little Rascal's/Our Gang series in a small but memorable role. This is certainly a movie that has such a timeless message and is brought to life by an amazing cast, and so many brilliant people working behind the scenes. It's a Wonderful Life is nothing such of magic and is as powerful today as it was in '46. 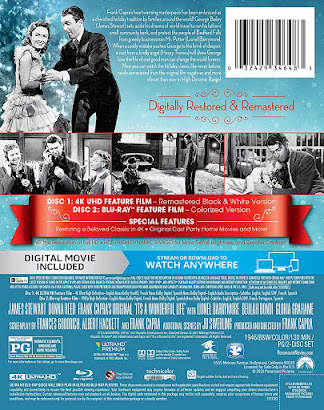 Picture: Fans of this film will be pleased to hear that Paramount has truly celebrated this film with their UHD presentation. Using original film elements the film that is over seventy years old looks better than ever. The overall picture has a sharp clarity and small details really jump out at you. I admit it's been a little while since I've seen this film (and it was on DVD to boot) so, I was in awe of just how stunning this looks. The grain is consistent and seems to have been smoothed out on the UHD. If you want to know in more detail about the process "Restoring a Beloved Classic" is a nice feature to check out. It's also worth noting that this edition has both the original black and white version and a colored version. If you have the previous 2009 edition this is well worth the upgrade.
Sound: It's a Wonderful Life sports a nice Dolby TrueHD mono track. This isn't a superhero movie, it doesn't have big action set pieces that you`d really need something like an Atmos track. The TrueHD track offers a very nice clear sound presentation and is in my opinion, on par with the picture quality.
Extras: Extras are included on the UHD disc and is everything ported over from the previous UHD release. This includes: Restoring a Beloved Classic (13mins), Secrets from the Vault: It's a Wonderful Life (22mins) and, It's a Wonderful Wrap Party (8mins). Missing from this edition is the vintage Making of It's a Wonderful Life Hosted by Tom Bosley, which is present in the 2009 edition. I believe the reason is they couldn't present this in UHD as it was made in 1990. It's a shame they couldn't have put this on the blu ray that comes with it but I understand why Paramount choose to let that feature go.
Finale Thoughts: Overall, if you already own the UHD edition that came out last year this is, as far as I can tell that exact same content minus the beautiful Steelbook (which also includes the mini poster).  Yes, I would have loved maybe a few more featurette's or better yet a film historian commentary which would have been the perfect companion piece. But I get that more extras would drive up the price point so I can understand the choice to keep it lean. We do however get some nice featurette's and, as I said the overall film itself looks and sounds breathtaking. And at the end of the day as much as I love the extras its all about the film. So, if you are like me and haven't owned this title previously on 4k, this is a must upgrade.
Posted by The Video Attic at 9:38 AM