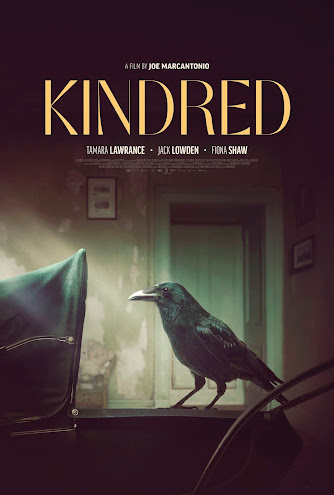 Summary: A psychological thriller rippling with suspense, KINDRED follows vulnerable mother-to-be Charlotte (Tamara Lawrance) as she is taken in by her recently deceased boyfriend's mother (Fiona Shaw) and her stepson (Jack Lowden), who seem increasingly obsessed with her every move. Plagued by mysterious hallucinations, Charlotte's suspicions grow about Margaret and Thomas' intentions for her unborn child.

It seems pretty fitting that one might conjure up Rosemary's Baby (1968) vibes from the poster for Joe Marcantonio's 2020 film Kindred,  it's because its just one of the films it wants so desperately to emulate. Might as well toss in some The Babadook (2014) and a little of The Omen (1976) for good measure. The thing is Kindred wants to be a psychological thriller but it never feels like it finds its own voice outside of its influences. The film is something of a slow burn and thats all well and good.  I certainly don't mind a film that takes its film building tension and unfolding plot. Sadly though, there really isn't much plot to speak of, in fact the summary pretty much tells you everything that happens in the film minus a few "twists". Speaking of, the filmmakers have some interesting tricks of their sleeves but again, it feels like they weren't explored enough to be truly impactful or even memorable. It highlights my frustration with this film, which is, it tries to make you think it is saying something meaningful or new about its core themes but actually its not. Worse yet it throws in some dream sequences to make it seem artsy and deep but really it's just trying to pad the run-time whilst also covering up for the fact its working with under developed screenplay. All while watching this I was trying to think of ways that the filmmakers could have subverted expectations or made it a bit more interesting. I don't mean to sound overly harsh, but I kept coming back to needing to toss it all out and start over fresh.

I will give the filmmakers credit, the film looks great with some beautiful outdoor locales which helps give the film a bigger more polished look on what I'm assuming was a modest budget. They get a lot of production value out of the mansion and eerie countryside settings helps craft a palpable tone. And there are some legit tense moments to be had as well. Problem is it doesnt last and those moments are few are far between. I will also say the acting is good, Tamara Lawrance and Jack Lowden are fine, if not just  abit uneven in places. The real star is clearly Fiona Shaw who brings class to material that is probably not worthy of it, if I am being totally honest. It's not even that I think Mr. Marcantonio is a bad filmmaker, far from it. I think that the biggest flaw is a script that is not fully realized and doesn't bring anything new to the genre. Worst yet it tries to throw smoke-bombs of symbolize to hide the fact that it's not a very deep film. Not a terrible first effort with some great photography and acting but misses the mark overall.