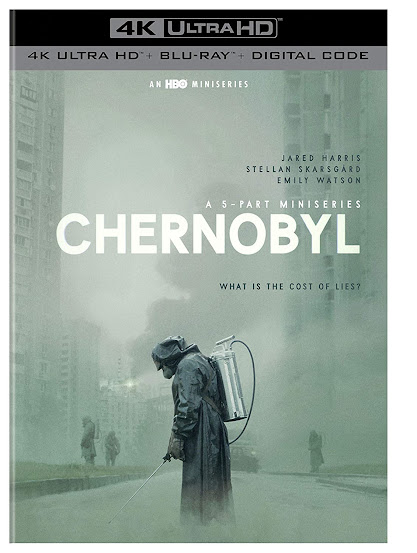 Disclaimer: Warner Brothers Home Entertainment has provided me with a copy of this series free of charge for the purposes of review. All opinions contained within are my own honest reflections.

2019 was a stellar year for both cinema and television and, Chernobyl was a really stand out mini-series that will likely go down in history as a stunning and disturbing work of art. For those of you living under a rock or in a deep dark bunker Chernobyl tells the story of the 1986 explosion of the Chernobyl nuclear plant. It would go onto be the worst disaster of it's kind. It's made all the more tragic in how it was handled by the Soviet government.  Director Johan Renck and writer Craig Mazin (who actually started his professional career writing goofy comedies) crafts a truly stomach frightening series, yet, and this is key, it never once feels disrespectful or exploitative.  Yes, it shows some gruesome stuff but it's always in the service to the story and never in a shock-value kind of way. Of course, the 5-episode series is directed with stunning pin-point precision by Johan Renck  with DP Jakob Ihre giving a hauntingly beautiful atmosphere with images that have been, for better or worst burned into my gray matter.  Also, we get a memorable score by Hildur Guonadottir who would go onto win an Oscar for her score for The Joker (2019). This is by no means an easy watch, but it's not suppose to be. However, it's well worth remembering that something this tragic and ultimately preventable actually did happen and, not all that long ago. I know that something a show this heavy is maybe a big ask because, viewing this in 2020 is very different and governments mishandling a big disaster is eerily familiar. It's a stellar series and truly pushes what a Limited series can achieve. I think that this will go down as a defining moment in television history and it's really a must-watch.

Picture: As I said in my review Chernobyl is a series that has a provoctative visual style. It straddles the line between grounded and hyper-stylized which is not an easy thing to do. This film is dark and I mean not just in subject matter but also visually. Colors are often muted and things have a sickly tint to them. The upgrade to 2160p really celebrates the series and is certainly in my opinion the way to go if you want to see this series as it really is intended. The overall images and in my opinion are sharp and retain a lot of detail in clothes, sets and locales. As I said this series isn't a big bright colorful outing so you may not knock your socks off. However, I think it's in the subtle details that makes this set shine.

Sound: Chernobyl has a DTS 5.1 soundtrack. The show has some amazing sound design and score which come through incredibly in this track. Sounds have a complex 3D sound which I think really sets the right tone.

Extras: Chernobyl has a nice array of bonus features. Included are Inside the Episodes a short but really worth while look into the making of each episode and the core themes explored within.

Behind-the-Curtain Featurette-Director Johan Renck goes into the creation of the series.

What is Chernobyl Cast and crew discuss the real life tragedy that inspired this series.

Pivotal Moment -The Trial In this short feature the trial scene is explored.

Script to Screen Featurette Highlights the making of some of the more harrowing moments from the series.