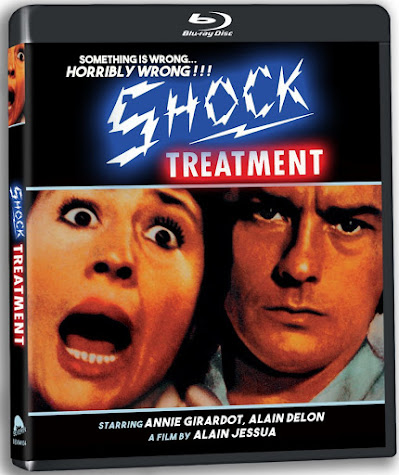 Not to be mistaken for the Rocky Horror sequel, Shock Treatment (1973) comes to Blu Ray from Severin Films. 38 year old Helene (Annie Girardot) joins a  posh rejuvenation clinic to finally look youthful and fight off the aging process. When a friend she makes mysteriously dies she starts to investigate the shady goings on. It seems that the price of beauty is steep in this '70's 'shocker'.

Right off the bat Shock Treatment starts off with an interesting premise that explores the fear of aging, vanity, and ultimately facing one's own mortality. This is, in my opinion a great core message to hang the plot on and you really don't see such topics touched upon in a lot of horror/exploitations. Does it work in the context of this movie though? Well, kind of.  While the above mentioned subjects are explored and are important to the film  I don't think, in my opinion they are explored to their fullest potential. My other issue with this film is it has some dull stretches. Instead of ramping up the action the film seems to slow down with the bulk of the remaining film seems like padding, with a slow build to the mystery of the clinic. What saves this film is of course the weirdness that coats this entire film. Highlights include a naked sea weed fight in a sauna. And of course the wonderfully frenzied finale. It's also worth noting how beautiful the film looks and the filmmakers takes full advantage of the locales, giving the film a bigger scope. Alain Jessua takes a stab at some thought provoking insight into the shallow world of the rich and vain and for that I have to give him a lot of credit. As I said I dont know if the point was really brought home though.  Shock Treatment is a grimy oddity and has at least some entertaining bits and some great random strangeness. That sauna fight will be forever burned into my gray matter.

Picture: Shock Treatment has a crisp look to it. You can see this in outdoor scenes where things look lush and vibrant. Grain is smooth and consistent with very little in the way of artifacts or scratches. Overall the picture looks fantastic, especially for its age.

Sound: Shock Treatment has a nice DTS 2.0 track. Music and dialogue come through nice and clear with no background hiss or audio drop outs. In my opinion the 2.0 track does a fine job offering a robust sound.

Koering's Scoring- Interview with Soundtrack Composer Rene Koering  (23mins). As the title suggests the films composer discuses the music and his history with the film Shock Treatment.