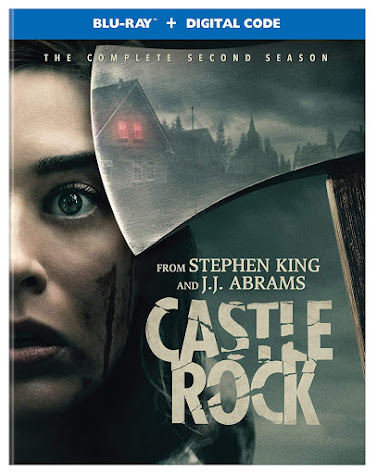 Disclaimer: Warner Brothers has provided me with a copy of this series free of charge for the purposes of review. All opinions contained within are my own honest reflections.

Annie Wilkes (Lizzy Caplan) get stranded in Castle Rock with her daughter Joy (Elsie Fisher). Things start to get weird however when an old evil is awakened turning the entire town into mindless soulless fiends.

I'm assuming everybody is firmly familiar but: Castle Rock the series takes place in the fictional world created by Stephen King and was meant to act as a bridge between various King novels and short stories. Sadly though, it was recently announced that the series got the axe after only two seasons despite garnering much critic praise. This is a real shame because I felt that season two was the point where the series was just finding it's footing. I will be honest I wasn't a big fan of season one. While it was no doubt well directed and had a high level of writing skills clearly at work it was just hard to connect with it. This was largely due to a overly convoluted plot which seemed to raise more questions rather than answering them.

Season two on the other hand was complex but the story was more streamlined and felt less like a frustrating web to navigate through. It also had an emotional center that helped hold some of the more fantastical threads together. While this season did connect slightly to season one, for the most part it's focused on an entirely new set of characters and situations. Despite teasing a Shining theme (at the end of season one), the main thread is a re-telling or rather an origin story for Annie Wilkes (Lizzy Caplan) and also worked in King's Salem's Lot. It seems like two stories that might not go together yet it actually works really well. Annie Wilkes proves to be a fascinating character and I think it was wise to give this fictional person a fuller, richer backstory. The core theme of the season cleverly ties in not only Annie trying to protect her daughter but mirror's Pop Merrill (Tim Robbins) a tough no nonsense guy that is also, when all's said and done is just trying to raise his adopted kids. It's the credit to the amazing writing that the Annie Wilkes plotline, Salem's lot  and the Pop Merrill and his kids all fold into the larger story in a way that feels organic and believable. I really don't want to spoil anything, which is why I kept the plot and details vague. I will say the finale is probably one of the most satisfying bit's of television I have seen in a long time. It's very odd that Hulu would cancel this series so early in it's run. It's really a shame because as I said I think it was just starting to find it's groove. Maybe with the popularity of Stephen King at a high another platform will produce a third season. Heck, maybe HBOMAX could fold it into their platform.

Picture: Castle Rock Season Two looks fantastic on 1080p. The images have a nice sleek clear look which is most likely thanks to filming on digital. A show like this has so much details in costumes, locales and set design so it's important that you see all of that in all it's HD glory. Colors are well maintained throughout.

Sound: Castle Rock Season Two features a DTS 5.1 track. Dialogue, score and sound design all come through nicely. This show has a lot going on in it's audio track and it's a very robust and in my opinion complex audio presentation.

Extras: Mother of Sorrow (16mins) This 16min featurette talks with cast and crew about psychology of Annie Wilkes and also various core themes of this series. Unlike a lot of these produced featurette's I really found this interesting and worth a watch.