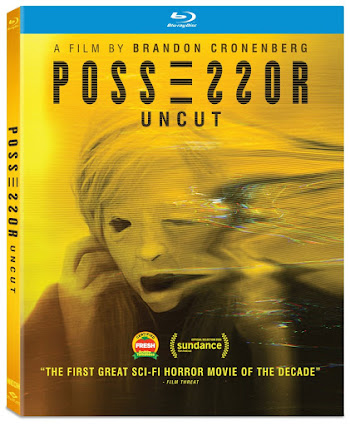 Disclaimer: Well GO USA  has provided me with a copy of this film free of charge for the purposes of review. All opinions contained within are my own honest reflections.

Summary: From the visionary writer/director Brandon Cronenberg, Possessor is an arresting sci-fi thriller about elite, corporate assassins Tasya Vos. Using brain-implant technology, Vos takes over other people's bodies to execute high profile targets. As she sinks deeper into her latest assignment Vos becomes trapped inside a mind that threatens to obliterate her.

If I had to think of maybe the most anticipated movie this year, it would be without a doubt Brandon Cronenberg's film Possessor. I must admit I was  kind of was leery about any kind of body-horror at this moment in time, as I feel like we are living in a kind of scary Cronenberg-like world of sickness and uncertainty.  Having said that I am glad I bucked up and dived deep into Brandon's utterly insane world of blood, flesh and machine. I will say right off the bat that Possessor is a film that your casual movie goer, or someone not use to a more challenging watch narrative wise might feel alienated. But, if you are firmly a fan of more gonzo, outings in the vein of Brandon's father David Cronenberg, well that you are in for a treat.

One thing I really love is high-concept science fiction and Possessor is a cerebral nightmare made of skin, blood and moving parts. It's style is seriously jaw-dropping in execution and much like an Argento film, the murder set-pieces are filmed like sex scenes, loaded with passion and grand gory-money shots. And while the film is brutal, its aim is more in totally adsorbing you into this world. Its nothing short of incredible how Brandon can take the concepts of parasitic human hosts taking over and assassinating high profile targets and, not only is it believable but it's endlessly fascinating. It's also mind blowing how he not only thought of a way to explore this premise in a grounded way but also work out how visually it would look when syncing in and out of one's host body. That is such a abstract concept but, for me it's something that is perfectly and cleverly realized. This seems like a good time to discuss the the film's surreal, acid-trip like feel. Fittingly this movie feels very much at home with early David Cronenberg with a mix of David Lynch and a dash of the cyber-punk flesh-machinery of Shinya Tsukamoto. Brandon clearly thrives in a purely visual medium and the world he conjures is cold, detached and is as methodically executed as the story. DP Karim Hussain shoots the film like a modern art piece that is equal parts grand and beautiful and upsetting. Andrea Riseborough (Mandy) gives what I think is maybe my favorite role of hers to date. Riseborough perfectly fits into this mad-cyber world like a black rubber glove and she gives a layered and most importantly subtle  performance. Jennifer Jason Leigh also shines in the supporting role.  Brandon will always be compared to his father who in my mind is ranks among the most important filmmakers of the latter 20th/21st century. But I think that Brandon has proved with Antiviral (2012) and now Possessor that he is using his fathers building blocks but crafting his own magical, moody and  grotesque works of art. Possessor is the gory afterbirth of high concept sci-fi insanity. A Must See.

Picture: As I stated in my review Possessor is a visually stunning film. The 1080p presentation is equally stunning and, retains a lot of detail and wild color palette. Darkly lit scenes really highlight the upgrade to HD.

Sound: Possessor, like it's visuals has a very strong sound design which enhances the films mood. It's why I am thankful we have a nice robust DTS 5.1 track. In my opinion this soundtrack offers a big punch and a nice amount of depth to presentation. Really well done.

Extras: Possessor's extras include: Deleted Scenes (Three scenes, no optional commentary) Three behind the scenes featurette's: A Heightened World (10mins) the cast and crew talk about the look and feel of the film.  Identity Crisis (14mins) Bringing Possessor to Life. The cast and crew talk about the core themes of the film and the seeds of the film.  The Joy of Practical (12mins) A really interesting look at the practical effects. As someone who loves practical effects I loved this featurette about the makeup and FX. Over thirty minutes of great behind the scenes which is a nice companion to the film. Three different trailers for the film round out the extras.