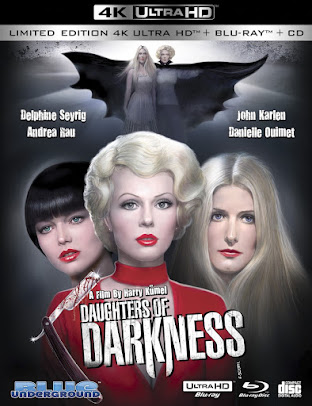 To merely state that I'm fan of Daughters of Darkness is a bit of an understatement.  The '70's vampire  romp has been firmly in my collection for probably a good fifteen years. So, when it was announced that Blue Underground was not only doing a new deluxe version of one of my all time favorite films BUT they were doing the first ever 35mm transfer AND in UHD, and including the soundtrack I think my mind exploded. The story is about a newly married couple that holiday in a big motel on the off-season. Only, they arent alone as the only other guests are two vampire women. What ensues is a spiral of deep dark abyss of sexually desire and blood in this stylish and surreal film. From the very start of the film Harry Kumel throws us into a very visually provocative and sexually charged world. And it only gets more twisted and weird from there.

In my opinion the term dream-like is frankly over-used but honestly, I think thats the best way to describe this sexually overwrought dark nightmare. The film has one foot in what feels like the real world yet, is very much drenched in this black velvet realm of sexual perversion and gaps in conventional logic. What I love about this film is there is something just so intensely off about every aspect of the film from the characters to the camera, to the weird time logic or how even the laws of physics dont apply. Narrative wise the film isn't that deep but, feels more like Argentos Suspria, in that the film is more about this epic twisted journey then weaving together a rich story. It's not to say the film has nothing to say, but, I feel like it works well if you can embrace it's more style over substance quality.  Also, Kumel injects a lot of dark humor with some tongue-in-cheek moments. I think the film is also helped by an outstanding cast. Delphine Seyrig shimmers as the glamorous vamp Countess Bathory. Seyrig is not only stunning but gives a memorable and fittingly off-beat/campy performance. John Karlen probably best remembered for the Dark Shadows series is also great and, like everybody else gives a slightly off kilter turn. Add in a great moody score by Francois de Roubaix (La Samourari) and amazing photography by Eduard van der Enden (Gettysburg) and you have something really special.

Daughters of Darkness is a classic of the surreal, drenched in blood and perversion all wrapped in a silk cape. A must see!

Picture UHD: As I mentioned above this new edition is really exciting because it marks the first time that Daughters has been transfers using original 35mm source material. It also includes newly discovered footage now put back into the film.  Color's truly pop and it retains fine details in costume, hotel interior etc are all amazing.  Skin tones are well balanced and have a natural look to them. Grain is smooth and consistent throughout with artifacts and scratches being scrubbed. In my opinion you can tell no over-processing took place and it retains that wonderful film quality. Let me put it this way, I've probably seen this movie 15 times and seeing this new transfer was breathtaking. This movie is visually sublime and this new transfer really celebrates this.

Sound: Blue Underground provides fans with a stellar new Dolby Atmos track. This offers a big bold layered sound experience, especially for those who have a sound system. Sound design and the haunting score come through extremely well and this track for me, really helped heighten the viewing experience. Also included is a 5.1 DTS track and an 1.0 DTS track.

Extras: Blue Underground really fills this release up with features. As always all older features are ported over with some new ones added. The film now has three commentaries: #1 with Co-Writer/Director Harry Kumel. Kumel provides a fairly lively and interesting track.

Commentary Track #2: David Del Valle and Star John Karlen. This is probably my favorite out of all three. David is as always well researched and has a way of connecting and engaging with his subject, this time being star John Karlen. Karlen and David. The two banter wonderfully with some cheeky moments from John. And, seeing how Mr. Karlen sadly passed earlier this year this makes a very important film artifact.

Commentary #3 New commentary by Kat Ellinger, Author of Devil's Advocates: Daughters of Darkness. Like David, Kat is extremely well researched and it was a lot of fun to listen to. As always Ellinger brings a passion to the subject and it comes through here.

More features ported over from previous editions include three featurette's: Locations of Darkness- Interview with Co-Writer/Director Harry Kumel and Co-Writer/Co-Producer Pierre Drouot (22mins) I loved this feature and its so cool to see the locations including of course the infamous Hotel. Pierre and Kumel play off each other nicely in their candid interviews are really charming and amusing. Well worth the watch.

Both interviews are well produced and lively. The candid stories of the making of the film are really great to have on record and makes a wonderful addition to this set.

Of course the set also includes a booklet with a new essay by Michael Gold- and the complete soundtrack CD.