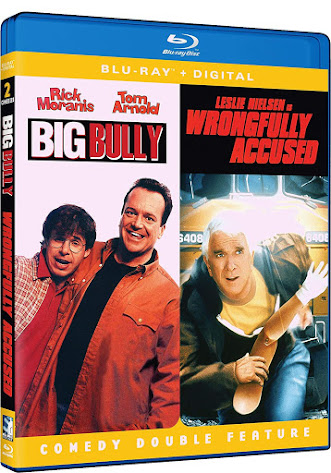 Ever see a movie when you were really young and one line of dialogue stuck with you? I had this happen to me with Steve Miner's late '90's comedy Big Bully. The line in this case comes from a harrowing moment when Tom Arnold's character recounts being locked up saying, "I bunked with a child that set his Mom on fire because she was vacuuming during Lost in Space". More on that later. A nerdy author named David (Rick Moranis) is invited back to his hometown to teach a creative writing class following the publication of his novel. Feeling like he needs a change and a better environment for his son Ben (Blake Bashoff). What seems like a fresh start is crushed when he is again confronted by his childhood bully Rosco (Tom Arnold) who is now the shop teacher. Now it's a battle of wits and wills as the adult Rosco is aiming to make David's life Hell.

Screenwriter Mark Steven Johnson has an interesting career first by penning family friendly comedies some of which lean heavily into the sappy (Simon Birch, Jack Frost) and later making the strange leap to failed Marvel movies and then back to sappy family films with Christopher Robin (2018). Johnson was coming fresh off writing the screenplay for both wildly popular Grumpy Old Men films to write this film. Johnson clearly is in love with these stories of idyllic small towns and being a child in such a place. This features in a lot of his screen work. The opening is a fairly brisk lean bit of storytelling and helps set up the rest of the film. However, the film starts to break down in the second and third act with big gaps in logic and plot holes. Also, Bully has some tonal issues, first playing out like light hearted comedy but this clashes with the  jarring mood swing to in the finale. I think that Johnson and Miner should have taken this into a similar area as The Cable Guy (1996) and just went fully darkly satirical. Horror fans will recall that Steve Miner directed films like Friday the 13th part 2,3 and House (1985) as well as the criminally underrated Halloween: H20 (1998).  You can tell Miner had directed horror as the latter half of the finale is shot like one with weird Dutch angles and atmospheric lighting. The film plays it just a little too safe to be truly memorable. I will say Johnson does inject some clever set-up's and pay-offs that, while predictable and petty hooky do help give the film a richer more layered feel. Bottom line though, its a middle of the road comedy that is really just known for having the second to last performance by Moranis before he went to voice acting and later retired until his rumored comeback in a Honey, A Shrunk the Kids reboot. The big issue is it doesn't have anything really interesting to say about bullying and plays it safe.

Picture: Big Bully looks really sharp in 1080p. Details in costumes, sets and locales really retain a high clarity level. Grain is present of course (being transferred from film) but is smooth and consistent throughout. Clearly, Mill Creek has sourced this from a nicely re-mastered print.

Sound: Big Bully has a robust DTS 5.1 track and offers in my opinion a great sound with dialogue, music and sound design coming through nicely.

Writer/Director Pat Proft has an a shall we say interesting resume. Some notable credits include The Star Wars Holiday Special (1978), yes, the infamous special so bad Lucas himself has actively worked to bury it. Yet, Proft has also had some classics or at least beloved hits like Real Genius (1985),Police Academy (1984), Hot Shots! (1991) and more recently the less than successful Scary Movie sequels 3-5). Wrongfully Accused is the one and only time that Proft directed a film. He also of course wrote the screenplay. Unless you`ve been living under a rock Leslie Nelson has been making spoof movies since the '80's, in fact Proft himself wrote The Naked Gun: From the Files of the Police Squad (1988) which further cemented Nelson (who earlier had the 1980  hit Airplane!) as a comedy legend. So, it would seem really fitting that Proft and Nelson should reunite for this late '90's comedy.  As far as movies goes, I mean you pretty much know what your in for with a '90's Nelson spoof, a flimsy plot that is thinly hung together for outrageous set-pieces and sight gags. This form of humor is very specific and one that you either enjoy or don't. I happen to really enjoy his other outings like Spy Hard (1996), and the Naked Gun series. It's very silly and at times corny as hell, and yeah, some of the jokes haven't really aged the best. But, I am happy to report that for the most part the jokes land and had me giggling to fully belly laughs. Of course, I think that the jokes are OK but Nelson with his charm to spare really sells the jokes. As I said the plot is really secondary and wisely Proft knows and embraces it. This is really the perfect movie to watch when you need a mindless bit of entertainment that knows exactly what it is. It's certainly not on par with the earlier Nelson comedies but, I still found it funny. Again, you know what your getting with these kinds of outings.

Picture: Much like Big Billy (both being mid-late '90's films), Wrongfully Accused looks really nice on 1080p. Colors have a nice warmth and retain a great deal of details in clothes, sets, and locales. Grain is again kept fine and smooth and consistent throughout.

Sound: Wrongfully Accused has a nice 2.0 track. Not the most complex sound but does the trick and offers a solid track. Dialogue and sound design comes through nicely.