The Belles of St. Trinian's , School for Scoundrels, Laughter in Paradise, Hue and Cry 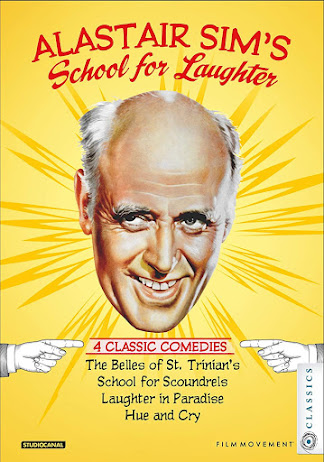 Best remembered for the iconic role as Scrooge in  A Christmas Carol (1951), Alastair Sims remains a legend of the stage and screen. With his unconventional looks and dry wit he mastered all genres including thriller's like Stage Fright (1950) directed by Alfred Hitchcock or mysteries such as An Inspector Calls (1954). Film Movement is celebrating his lighter comedic turns in Alastair Sim's School for Laughter: 4 Classic Comedies  1947-1960.  As always I will be reviewing each movie with a breakdown of picture, sound and what extras are included.

Hue and Cry from 1947 tells the story of a plucky gang of boys in London that uncover a a gang of thieves that use a hidden code buried within a pulp crime magazine. This is an early pro-type of the motley-crew "kids band together to outsmart/outwit their adult counterparts" genre. American movies took this formula with outings such as The Goonies (1985) and Home Alone (1990)  to great success. Story wise the film is really interesting though at a lean run-time of eighty-two minutes the film gets side-tracked and could have used a tighter focus. Crichton who directed one of my all time favorite crime comedies The Lavender Hill Mob (1951) saves the film by injecting in a lot of high energy with the kids and its easy to both engage with the story and root for its characters. Sadly, Sims is not in this film very much but of course he shines when he does make an appearance. The film is not without some cringe moments and its kind of weird to hear kids as young as nine/ten talking about putting in shifts at work. It's also eerie seeing bombed out parts of London in the aftermath of WWII. Fairly enjoyable little crime comedy with some pretty solid child acting complimented by some nice moody camera work and lighting which gives it a slight Noir feel.

Picture: Film Movement clearly has put a lot into the restorations in this set. Hue and Cry is over seven decades old yet the film is nearly pristine in transfer. The film has a crisp clear look with artifacts and scratches being scrubbed. The film maintains a nice grain-quality which means its my judgement that it wasn't over processed and they had good original material to work with. In my opinion it's a stunning presentation, especially for a movie as old as it is.

Sound: Hue and Cry sports a robust 2.0 track. Dialogue and music come through incredible clear with no background hiss or audio drop out.

Extras: Hue and Cry includes a Interview with Steve Chibnall (Professor of British Cinema, De Montfort University, Leicester. This is a pretty interesting look at the idea and making of the film.

Also included is a fun Location Featurette (9mins) hosted by Film Historian Richard Dacre. A very interesting bits of trivia accompanies the locale exploration. I really thought this was a great feature.

By far my favorite of this set, Laughter in Paradise tells the story of a millionaire prankster who, upon dying enacts his final joke. His relatives must preform a task that is based on how they lived their lives up until that point. For example, his sister Agnes (Fay Compton), a rude spinster, must seek employment as a house keeper for 28 days, a meek store clerk named Hebert must hold up his boss etc. Each task is meant to improve their character and teach them a lesson. If they dont do the task they forfeit a tidy sum. They also cannot contest the will as this too would result in forfeit. As I said, in my opinion Laughter is by far the best movie in the collection. Though not without some logic issues the plot is ingenious in its simplicity and allows for some great physical comedy and hijinks. And while the writers have a lot of fun with this scenario the film wisely balances the silly with a great deal of heart and emotional stakes.  Alastair Sim's is showcased a lot in this film and we the audience are treated to his full range of perfectly timed physical comedy and how his dry sardonic demeanor could translate into some hilarious moments. Joining Sim's is a host of other great British character actors, a few of whom worked with Sims, including Guy Middleton and Joyce Grenfell. It also famous as an early small role for Audrey Hepburn. It's far from a perfect film and some plot threads arent nearly as tight as they could have been, but it's clever premise is matched by some great comedic gags and effortless acting from its entire cast. For my money it's a must watch.

Picture: The 1080p transfer of Laughter is good with sharp clarity throughout. It's not without some minor issues like some scratches and artifacts but nothing that I feel distracts from the presentation. Overall, while it's not pristine it's still a damn good effort on Film Movement's part and I was never taken out of the film by any transfer issues. You certainly can see a marked improvement if you ever seen old unrestored clips or trailers for this movie.

Sound: Laughter has a 2.0 Mono track. Dialogue and sound design comes through nicely. No hiss or background noise to be had, nor any audio drop out. Overall a fine sound track.

Frank Launder, best known for penning the screenplay for the early Hitchcock success The Lady Vanishes (1938) and The Blue Lagoon (1949) helms this British high farce. Headmistress Millicent Fritton (Alastair Sims) and her brother Clarence (also Alastair Sims) runs a "posh" boarding school which is filled with unruly girls more interested in the horse races. Alastair Sims is gut-bustlingly funny in a duel role as the prissy head mistress Millicent and also her brother Clarence. Launder trademark wit is in full force with some nice dark humor sprinkled throughout. Sim's is given room to explore his wide range of comedy and it's probably the showiest role for Sim's in this set.  There are some really funny gags and set pieces that get ever increasingly mad-cap as it gallops towards the finale. The film is filled with great character actors and truly everybody understands the tone of the material. If I had to complain I think that the film could overall use a tighter narrative focus. Also, the comedy is very broad so that can be a plus or minus depending on your personal taste. For me, I dont mind silly very big-broad physical comedy but it does get a bit tiresome after awhile. Overall a fun frenzied outing and showcases Sim's to his upmost.

Picture: Film Movement really does an excellent job with their transfer of Belles. No scratches or artifacts that I could see and the overall 1080p transfer is crisp, clear with lots of fine detail retained.

Sound: Belles features a crisp clear 2.0 Mono track. Dialogue and sound design some through nicely with no background hiss or audio drop outs.

Henry (Ian Carmichael) is a down-on-his-luck guy that lets life and people take advantage of him. He enrolls in a school to teach him how to take the upper-hand and also, take advantage of other people. Despite a really interesting premise the film is shaggy when to its pacing. The filmmakers spend over thirty minutes of its ninety-five minute run-time in just merely establishing Henry as a, for lack of a better term, loser.  For the remainder of the runtime we see hijinks as Henry gets even with the various people who have wronged him. It's not very economical story wise. And, if you want to really get down to it Henry's character arc feels rushed and unsatisfying. The film is not without its charms and there are some great comedy bits. The film is also brimming with classic Brit actors like Dennis Price, Ian Carmichael in the main role and Terry-Thomas. Thomas will be remembered by horror fans as the unlucky victim whose blood is drained by Vincent Price in The Abominable Dr. Phibes (1971).  The comedy here is very broad and may be too broad for your taste. I found the humor uneven with some nice gags but also muddled by some jokes that dont land. Overall though its silly and breezy enough to be watchable despite its flaws. It's a perfect rainy day, shut-off your brain movie. Not great but it does the trick.

Picture: SfS turns 60 years old and Film Movement restores it beautifully. The transfer offers a crisp clear picture with a great deal of depth and detail. I really am stunned by how good this looks. Clearly a lot of time and resources went into this restoration and if you are a fan of this movie, this is probably the best this movie has ever looked.

Sound: SfS has a nice 2.0 track. Dialogue comes through clear with no background hiss or drops in audio. Overall a really nice robust sound.

Overall/Final Thoughts: I had seen Alastair Sim's in other films but, honestly not too many. This is why I wanted to take a deep dive into these four films. Overall, I think this is a great set, especially if you, like me are relatively new to actors output. I even think that this makes a wonderful set if you enjoy classic British comedy or are new to cinema from across the pond. Oddly, School for Scoundrel's and Hue and Cry, while very much worthwhile films actually feature very little of the titular star which would be my only complaint. I certainly won't bemoan the selection though, because as I said I enjoyed each film on some level. Hardcore fan's of the actor might be given pause by this but I hope that doesn't detract because this is a solid selection of British genre fare.  Currently this film is only 45.07 (at the time of writing this) and I think you really do get your money's worth. Each film looks and sounds great and it includes some nice extras as well as a booklet with pictures, trivia and new writings by  Ronald Bergman. In my humble opinion it's well worth the sticker price and I will certainly be re-watching these in the future.