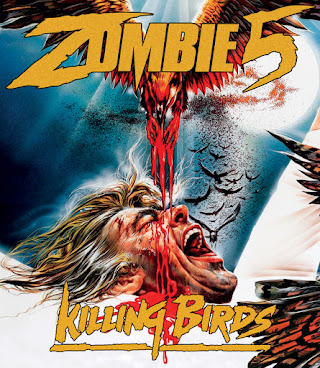 I'm going to spare you the whole "Zombie" franchise lecture, but to sum up first there was Dawn of the Dead (1978) aka Zombie, Fulci's Zombie (1979) aka Zombi 2, Zombie 3 (1988) and Zombie 4: After Death (1989) and  of course 1987's Zombie 5, all unrelated films with Zombie tagged onto the title. The same thing happened with Beyond the Door (1974) oddly enough. A group of wide eyed college students take a trip deep into the wilderness to study rare species of birds. But, in typically slasher fashion the campers get more than they bargain for in this insane Italian outing.

Killing Birds (1987) starts off like some fever dreaming soaked in blood with four kills before we even reach the ten minute mark. Sadly though, the film doesn't try to keep up with this momentum and is a bit of a slog in the first and mostly second acts. Killing Bird's does pick up with some more kills and some great nice surreal imagery but for some, it might be too little too late. Obviously the film is trying to cash in on The Evil Dead (1981) fused with nature-run-amok movies which had a boom throughout the latter part of the '70's and throughout the 80's and even early '90s. What we get is a muddled plot that is even weak on the gore expect for a few good eye ball plucking's. I wish this movie would have amped up the craziness which might have helped mask the virtually non existent plot. Even as someone who loves trashy '70's and '80's outing I found Killing Birds to a bit of a chore to get through. In its defense I will say the film at least has some cool weird moments like a crunchy zombies, a Christ-like crucifixion, eye trauma and more fog than in the movie The Fog (1980).  Also seeing Robert Vaughn in this movie is jarring enough but it's with funky rotten eye make up and folks that alone is worth the price of admission. You also cant help but love the bad over acting and hilarious dialogue that make Italian genre fare worth watching. The movie is bad but, if you love gnarly Italian garbage cinema you might have a good time with this one despite its mountain of flaws.

Picture: Vinegar Syndrome never ceases to amaze me with the excellent work they do with their restorations. Killing Birds has been given a 2k facelift using 35mm source material. Colors are vivid and really pop through out. This film being transferred from 35mm has a nice grain quality but for those who complain about that its very consistent and well maintained. Night scenes and darkly lit scenes really benefit from this new transfer and also celebrates the films spooky, surreal vibes.

Sound: Killing Birds has a nice DTS 2.0 soundtrack. Honestly this is a really full robust soundtrack and I was impressed with the sound VS was able to get out of just a 2.0. Dialogue and sound designs come through healthy. Its worth noting that an original Italian track is also included.

Extras: Talons (49 mins) this extended interview with director Claudio Lattanzi in which he discusses the making of Killing Birds. Lively and really worth checking out.

Birds of a Feather (15 mins) A interview with sound man Larry Revene, A feature length commentary with historian Samm Deighan. Samm has done other commentaries and is really enjoyable to listen to. His tracks are always informative and entertaining.

Rounding out the features is an original English Trailer and Italian trailer. I also love that this has a cool reversible cover featuring the original title.