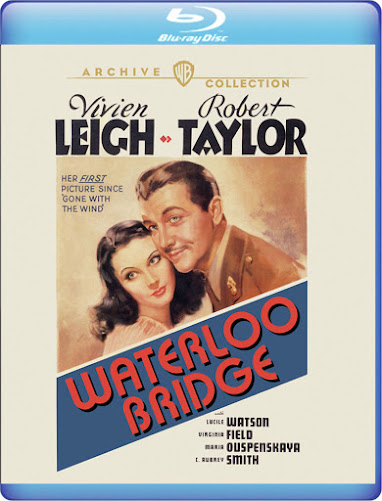 Disclaimer: Warner Archives has provided me with a copy of this film free of charge for the purposes of review. All opinions contained within are my own honest reflections.
Based on a 1930 play of the same name and had a adaptation on the big screen in 1931 from Frankenstein director  James Whale. The thing was when Whale made his version of Waterloo Bridge it was Pre-Code. This meant the taboo nature of prostitution could be explored more faithfully to the play. LeRoy's version comes at a time when the Code was strictly enforced and hence the subject matter is sanitized. Set during World War I a meek ballerina named Myra (Vivian Leigh) turns to a life of prostitution believing her husband is dead.

As far as remakes go, Waterloo Bridge has the budget to expand on the story, whereas Whales version is a more stark and stripped down telling. LeRoy is given the freedom to really explore the characters with greater depth whilst also providing a grander overall scope.  As much as I enjoy Whale's oft forgotten version of the film I can see why the '40 film overshadows it. It's sad that the film isn't allowed to explore the core themes but I still think it gets the message a crossed nonetheless. Watching this for the first time for this review I got a sense of impeding doom and mellow collie that haunts the entire affair.  Bringing the film to life is a fantastic cast of Golden Age of Hollywood. Vivian Leigh best remembered as the lead in Gone with the Wind (1939) does a great job in the lead. She has a excellent range and does a good job at bringing this character to life. Robert Taylor is also great and just has that leading man charm that makes the romance believable. And its not just that these two actors carry the movie because the supporting roles are filled to the brim with amazing character actors. Couple this with beautiful black and white photography by four time Oscar winner Joseph Ruttenberg (Mrs. Miniver, Gigi) and a robust score by Herbert Stothart (Wizard of Oz) and you have a engrossing classic film. Some seem to prefer the original version though, as I said, even as a big fan of Whale's take on the material this has a decided edge over it. I encourage everybody to check out both and decide for yourself.

Picture: Warner Archive is the gold standard in restoring classics to their former glory and Waterloo Bridge looks stunning. The film sports a brand in 4k transfer and the image is crisp, clean and has a clarity that is sure to wow. Grain is fine and consistent throughout with black levels nicely handled. I cannot stress just how wonderful this new print looks with any artifacts or scratches removed.

Sound: Waterloo sports a nice DTS 2.0 soundtrack.  Dialogue comes through very nicely. There is very little hiss or background noise to be had.

Extras: Waterloo Bridge includes an episode of The Directors Playhouse Radio Program featuring Norma Sheer and Mervyn LeRoy.  Rounding out the features is a trailer.  I'm actually a little surprised that the '31 version isn't included as well (something they did with Gaslight) but maybe (and I'm only guessing here so please dont take this as fact) they are planning on doing that as a stand alone.

It's worth noting that Warner has released James Whales version of Waterloo Bridge (1931) is on DVD through their TCM Forbidden Hollywood Collection One. It's well worth seeking out.

Overall: Waterloo Bridge is very much a product of its time, therefore its hasnt probably aged incredibly well, however for fans of Golden Age Hollywood its really a excellent albeit a bit depressing film that has so much talent in front of and behind the camera. This new transfer is just amazing and if you have this on DVD its well worth the upgrade. If you dont own this already, well what are you waiting for?