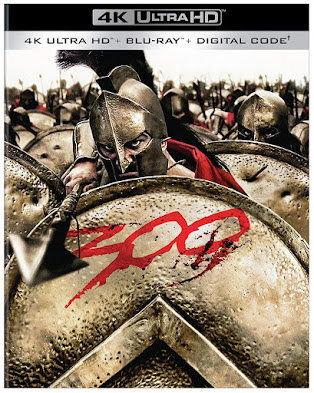 To say Zach Snyder is a polarizing figure in cinema is putting it lightly. Snyder came onto the scene in a big way with the Dawn of the Dead (2004) remake which was written by James Gunn. The film did extremely well earning both critical praise for its spin on Romero's watershed horror film whilst also earning over 100 million on a scant 26 million dollar budget. While Dawn wasn't by any means a huge budget film it wasn't small either, especially for someone who largely cut his teeth directing music videos prior. It was a gamble but it paid off and it lead to Snyder helming the big budget adaptation of Frank Miller's graphic novel 300.

I will admit I have never seen 300 until now and wow this was a wild ride! Right away the film reminded me of those big old epics that Hollywood churned out from the '20's well into the early '60's until, you know, the counter culture put the final nail in their coffin. And, honestly I think this movie would feel right at home in a big spectacle from Cecil B. DeMille had he had the budget and freedom from the censorship of his era. Here's the thing: My big takeaway from this movie is its its action set pieces are well done, visually its stunning and, honestly thats kind of enough. Like big historical Hollywood epics its shallow but fun at the level of pure popcorn entertainment. So, this movie has been labeled problematic and its easy to see why even at the time it faced criticism of Iranophobia and homophobia. The former Snyder himself seemed to confirmed himself in an interview saying (paraphrasing) he wanted to make straight 20 year old's uncomfortable with the effeminate villain King Xerxes. It's really cringe-worthy and I understand why this movie gets the backlash but, on the other hand I think the movie is so over-the-top and silly that it's actually hard to take it seriously. In a nutshell 300 is a big dumb action movie that happens to have a lot of style injected into it. It goes through the motions of characters and exposition but we all know its about the big splashy battle scenes. I give the movie a pass because I dont legit think it meant to be mean-spirited but its still worth mentioning the parts that have aged horribly. Big, dumb, loud and cool looking, 300 is very much a product of its time and if you can gloss over its more problematic parts (and I dont blame if you if thats a deal breaker) its a good way to kill two hours.  At the end of the bloody day this battle epic pleases.

Picture: 300 is a movie made for UHD and, therefore fans are in for a treat. There is a slight uptick in vivid color and details that really had my jaw on the ground. This movie is a interesting one in the annals of UHD reviews because, style wise the film is at times rather dark, moody and overall muted color wise. The source for this film is 35mm with greenscreen digital effects and not shot entirely on digital. This means that this is upconverted from a 2k master. The end result may be more grain forward than some fans may like but honestly I think its well maintained throughout. At the end of the day this is a worthy upgrade in terms of picture.

Sound: 300 wields a truly epic ATMOS track. The gold standard in a 3D sound is an ATMOS track and frankly, this thing sounded incredible. Those with a good sound system will get a nice robust complex sound from this track.

Extra:  The film features a slew of great extras including a Commentary by Zach Snyder, Writer Kurt Johnstad and Director of Photography Larry Fong. This is a really lively fun commentary track and worth listening to.

Who Were the Spartans? The Warriors of 300 (4mins) Look at the ways of life a Spartan would have lived as told by the films actors and director.

Preparing for Battle: The Original Test Footage (6mins) A look at the origin of the film as well as the test footage.

Making of 300 (5mins) A quick look at the making of the film as told by its cast and crew.

300 Image Gallery (3mins) a series of rapid fire images from the entire production.

Webisodes Total Runtime (38mins) A in-depth look at the different aspects of the 300 production.

Overall: Final Thoughts: Warner Bros has really been doing an amazing job with their UHD titles. Earlier this year the did Beetlejuice, The Goonies and Guy Richie's sorely underrated Sherlock Holmes films. Those are all great dont get me wrong but it feels like 300 was tailor made for the UHD format. Warner's does an excellent job at pushing the format forward and this is certainly a movie you will want to pop in to show off the full might of your UHD TV and sound system. Couple this with a lot great extras and you have worth while disc.