The Video Attic Exclusive! Interview with Save Yourselves! Writer/Director Duo Alex Huston Fischer and Eleanor Wilson! 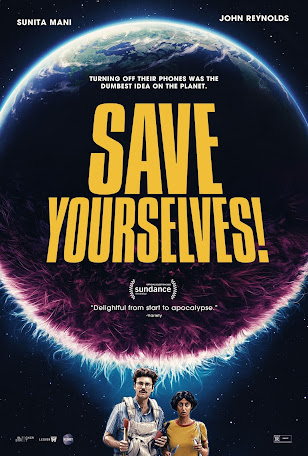 Click HERE for my review. Please note this will open a new browser so those with pop-up blockers may not see it.
Minor Spoiler Alert for a certain plot point. No spoilers for the ending.

Mike: First I just wanted to say that I loved the movie, in fact I think it was among my favorite of 2020.

Mike: So, this is both of your first feature length film. What's the biggest challenge going from the short format to feature length?

Eleanor: Stamina, you know obviously when you make a short its only a two or three day shot. And, the process is very fast and furious and exciting, you get this be adrenaline rush then its over. This is like  an adrenaline rush that doesn't stop for 23 shooting days. (laughs). So, yeah I think it was just learning to keep going throughout that process.

Alex: It's funny, we were told that our first week was like a typical second week and our third week and so on. We clicked so beautifully at first, our crew was incredible, we got really lucky with everybody. Like, we even got our first shot up fifteen minutes before six a.m.

Alex: Everybody was just excited to go. I had never done the whole thing of people getting together in a remote place and it really became like a summer camp. That was huge! I loved that.

Eleanor: Yeah. It was really fun. I had done those kinds of shoots before. This one Alex and I were staying in the actual cabin where the film was shot and everybody else, like the camera crew had a house and other departments shared a house. So, it was defiantly like a summer camp vibe. Staying on location was also hugely benefited from. Being able to prep each night think about what we had going on for the next day. 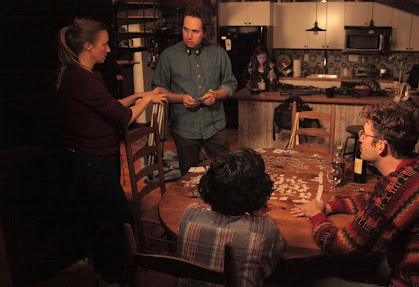 Alex: Having a good assistant director is probably the biggest thing.

Alex: Because neither one of us had worked with a a.d before...

Eleanor: Or a script supervisor...

Alex: Because on short projects you can keep it in your head.

Eleanor: Yeah. It's really nice to have some organized people.

Mike: And you said the shoot was 23 days?

Alex: Yeah. I think we were lucky because other indies shoot around 16 days, and oh my god, we felt like this was just enough.

Mike: So, I read online that you guys tried to get the mech rights to poufs? Love to confirm this and also maybe have you expand on that abit?

Alex: Yeah. We were idiots (laughs).  Early on we were like "I think poufs are cute and I wouldn't mind having one in my house and maybe other people would feel the same way", so I thought since we invented this thing that we could keep the rights. Then the lawyers were like "No way!"

Alex: I dont know how anyone has every done that before, I mean this is just a little indie movie so it was kind of a joke the whole time.

Eleanor: We never thought it would be something that people would actually create merch from since its just an indie film but apparently...

Alex: They are making pouf merch.

Mike: So, Amy Sedaris has a fun cameo. How did that come about?

Eleanor: We knew that she had worked with both John and Sunita before.

Alex: She played John's mother in a series and she's on a show with Sunita.

Eleanor: Yeah, so we knew there was a connection there and yeah, the casting director reached out...

Alex: We did not think she would be down because it's such a small role. But, we thought it as a fun little detail in the movie, because she has a pretty specific voice so you`ll pick up on that in the movie.

Eleanor: We are just such huge fans of hers and, we found out one day on set that she agreed to do it.

Eleanor: It was so exciting. She just came in for like, 40 minutes or something while we we're in post and nailed it the first time. We were just looking at each other like, we have to make her do it again so we can hang out with her more (laughs). She's just so naturally funny and brought a little bit of improve and it was great.

Alex: We would love to expand on her character.

Mike: Thats actually a really interesting seg-way into something I was going to ask a little bit later but do you ever doing, not maybe a sequel per se but maybe movies that expand on characters from the same universe? Like, the same invasion from another characters point of view.

Eleanor: Thats actually exactly what we want to do. We think this could expand into a series or something like a series, showing us the same days but from the points of view of the other characters and kind of branching out from there.

Alex: We have all these people in the movie only have have a line or two and their incredibly funny people. When we wrote the movie we actually wrote out all these backstories for these characters, like we came up with where they would end up. So, we have all this stuff and part of it was for a writing exercise and part of it was because it was so much fun to think about.

Alex: We would love to.

Eleanor: A lot of it was we had these actors like Johanna Day come in for like a day, (laughs) so, we wanted to make sure she had a backstory. It was fun to come up with that and actually when we were talking with her about her backstory was when we came up with the idea to actually give her a name tag in the movie because we thought it would be funny if she came from her job where she wears a name tag and ends up in the middle of this thing. So, thats why in the movie she has a name tag with Judy.

Alex: And we would love to see how everybody deals with the end of the world. Especially like this type of silly end of the world which is very confusing and dangerous in unexpected ways.

Mike: That's great. I would love to see John Early maybe get his own movie.

Eleanor: Yeah, because remember he was in Mexico City trying to have a wedding. Like you wanna see that! (Laughs). 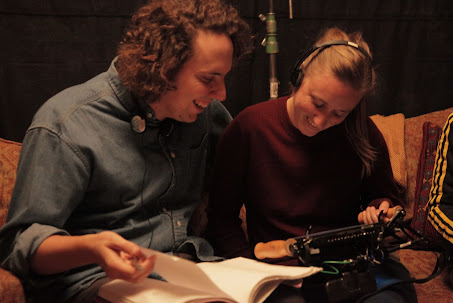 Mike: This movie reminded me of Critters, I was curious if that was a clever homage to that film?

Alex: For sure. We would love to be in the same family as Critters or tribbles or even the fuzzy version of Gremlins.

Alex: We originally came up with the poufs for very practical reasons, in that it would look like a piece of furniture in a hipsters cabin. Thats how it started but, we love those old movies and we watched Critters again and talked about the creature design and how to make the creature design and how to make the pouf move. And we didn't do the tumbling like in Critters, they roll around and have a face and so we diverged in those ways.

Eleanor: Yeah, its defiantly nice to kind of have that feeling. Because even before it becomes an alien invasion movie we wanted it to feel like a classic rom-com, and we tried to shoot it the style of those '90's movies in that genre. Then, it can of went hand in hand with nostalgic creature movies as well as melding those to genres together. It really set the tone for the visuals.

Alex: It's really fun to be a huge fan of old creature movies..

Eleanor: And make one.

Mike: How do you feel you`ve subverted the sci-fi/alien invasion genre?

Eleanor: The biggest like rule, when planning the movie was, their never going to figure it out. And we were trying to stick with that. Because in a lot of these movies its natural to want some kind of conclusion to what's going on and for the heroes to figure out what the aliens want and who to defeat them. However, we wanted to do a version of that, that was more like if this happened to us, um, we would never figure it out (laughs), especially not in three days.

Alex: Movies like Signs or Armageddon or Independents Day I love all those movies, even Signs...

Alex: But seeing them figure out how to defeat the aliens and we were like, "Wouldn't it be funny if, it was realistic..."

Eleanor: Yeah because in an early draft, like when the script was longer and we cut it down to a manageable size. There was specific things that you think their going to figure it out be it was the exact opposite. We even do it in the finished film with tiny little moments. Like when they are fighting with the alien and Jack pulls out the crystal out his pocket like only to end up throwing it (laughs). It was always like no matter what it a comedy even when things do get crazy and scary.

Alex: Some people watch the movie and they're like, "They didn't pay that off." But, that was really fun for us, to set things up and make them not play out like you think they would.  I guess thats the definition of subverting.

Alex: We had a lot of fun with it.

Mike: I'm curious if the film comes down on the side that it's actually good to be connected on our devices or is there any kind of statement similar to that, that we are meant to gleam from this film?

Eleanor: I think if there was any kind of statement that is isnt really with the phones itself but more in how we use it. But we certainly never saw it as an anti-phone movie. We are both very addicted to our phones and have no plan on trying to give that up in anyway.

Alex: Well, I did delete my Instagram app but I re-downloaded it.

Eleanor: Yeah, I didn't want it to be seen as message or PSA about cell phone use. If you watch The Social Dilemma then you`ll (laughs) get a better look at that.

Alex: The movie is defiantly not anti-phone. If anything its little more pro-phone, because if they had it they`d know what the hell was going on.

Eleanor: Yeah, it taps into this idea that it's a total falsehood that you can fix your life or change your problems by getting rid of your phone for a week and trying to get in touch. Obviously, we need to be in contact with one another, and thats not how your going to save the world.

Mike: Okay great, so to wrap things up what's the next project you both have lined up?

Alex: We have a couple things, we have some things together we want to write and direct. Currently we are adapting a book, we cant talk too much about but, we can say it's very different from this movie. Were really interested in this big high-concept comedies. They kinds we use to love in the '80's and '90's. So, hopefully somebody will give us a chance to do that.

Mike: Awesome! I very much look forward to whatever you both have in store!

Comes out on VOD Oct 6th! Check it out!