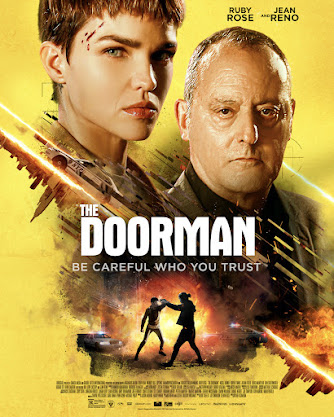 From films like Hellboy (2004)  to acclaimed television shows like Man in the High Castle and  Charmed Rupert Evan's has been an exciting fixture in pop culture. I had the extreme pleasure of talking to Mr. Evans about his latest film The Doorman which will be on home video starting today!

RE: Good Afternoon Michael how are you?

Mike: I'm doing great thanks. So, you got to with the legendary Ryuhei Kitamura on The Doorman. What was it like working with him?

RE: Yeah, he was amazing actually. He's a man of very few words which I dont mean as a criticism. He's very clever at what he does because he gives you pointers and has a very clear understanding of exactly what he wants from the movie and from the scene. He allows the actors to find the scene for themselves and as a collective. So he really spent a lot of time trying to heighten the stakes and each scene have as much believability as possible. He allowed us to play with the scene and really find a way of doing that and he gave us the freedom.

Mike: Great. So he would take input from the actors?

RE: Yeah, we changed bits and we were able to try and find a way through a scene. I remember we were filming a dinner scene with Ruby Rose and the actor who plays my son in the film. In this scene he has a sort of tantrum. And, he allowed us to find a way to make that believable, so we explored it and changed a bit of it. We moved the scene around and changed places to kind of find a way to make it more believable and I kind of panicked that we were moving away from his vision but he was very collaborative. It was great.

Mike: Yeah, you had such an amazing cast.

RE: It was amazing. I mean listen, Jean Reno, obviously I had watched his movies for many many years and we've all kind of grown up with his movies. It was really special for me to work with him and amazing actually. He was everything I thought he would be. He's a very deep thinking man and I think he came across like that both in the film and in person. He's very funny again so he`s always having jokes and stuff. He was lovely to work with yeah. I think we've seen all the movies Ronin, The Da Vinci Code, I mean he's done them all. I remember growing up with amazing films like Leon so it was a big moment for me to meet him. I also had a great time with Askel Hennie. I've never met him prior, he's a Norwegian actor. He's a really great actor and he was also very collaborative. Ruby was also fantastic. It's her movie really and she really lead as all. She (Ruby) has a lot to do emotionally and with action so she was great. All and all it was a great cast and we had a good time in Romania shooting it.

Mike: Speaking of actors, I thought the child actors did a fantastic job in this.

RE: Oh yes. She (Kila Lord Cassidy) was great, so adorable. Then my son played by Julian Feder he was absolutely fantastic as well to work with. It was great. They brought together some really great actors which was part of the appeal. Weirdly, my daughter Kila Cassidy, her mother is a friend of mine who is also an actor. Elaine Cassidy is her mum so  there is a daughter of a friend of mine it was kind of weird (laughs). It was great, that was a lovely surprise.

Mike: What drew you to his role in The Door Man?

RE: I would be lying if I didn't say that working with Jean Reno really interested me. I watched so many of his movies over the years. I really did want to work with him and see what he was like. He certainly didn't disappoint. Also, I think the character was a draw. I read the script and saw this man who at the beginning of the story is a single dad thats trying to kind of coup with the loss of his wife whilst also bringing up two kids. And, by the end of the movie his relationship is kind of re-built and back on track. I thought that my characters arch is brilliant. Characters that go through that kind of change is something all good actors look out for.

Mike: So you just directed your first project an episode of Charmed.

Mike. I was wondering if your outlook has changed as an actor since you`ve on the other side of the camera?

RE: It's completely changed Mike! Yeah. Ha. There's been many times when I've said to a director, "No, I'm not doing that. It doesn't feel right", and you kind of have to negotiate. On the side I'm like, "Just please do what I said, please!" (Laughs) So it was amazing. Yeah, and I'm directing another Charmed episode for them. It's a whole new world when your directing and you realize how powerful the camera can be in telling a story. Also, how powerful editing is and how you can really shape a story through editing as much as anything. So, I continue to learn that really. Yeah and how the camera can help you engage with the story and make you feel and control how you want the audience to feel. Not only that but I feel I know how to talk to and communicate with actors and understand what their going through and its been a real benefit for me. It's been a learning experience but an enjoyable one, I'm very lucky and I love it. So, yeah I hopefully will be doing more of it in the future.

Mike: That's awesome. Would you say maybe all actors should get a taste for what its like on the directing side?

RE: Well, I think there are two types of actors and I'm generalizing here because there are more types of actors but in general there are two types of actors I've come a crossed. There are the ones that are very focused on their work as an actor, their craft as an actor. And that kind of consumes them and they take that very seriously, as I do as well but thats their world. The other kind of actor is very focused but also very nosy which is what I am. They start to say stuff like, "What do you do? How do you do that with the focus pull? The camera does this? Why do you push the camera in, or out" stuff like that. So, when your on a show for a long time or a film and your working with the same camera operator or DOP you start to become a bit nosy and interested in their world. That's kind of what happened to me really I became more intrigued as the years go by about how you shot this or why you do things the way that you do. I'm just a nosey type.

Mike: Do you think you would transition fully into directing or would you do a bit of both?

RE: Oh, I'll never say never. I think I'll always love acting. I feel very lucky that I can both act and direct really. Will see where it all takes me. This is just a new experience now and I hope to create some of my own material as well in the next year or two and will see how that develops. But, I love acting and I think I'll always do it, its just part of my DNA. As an artist I do feel like an actor at heart. I think I'm just an actor who directs occasionally.

Mike: What are you currently working on? Is anything back in production?

RE: We shut down in March with Charmed and we just picked up on that. Were just carrying on from where we left off really. I'm lucky enough to be back at it here in Vancouver, thats where I'm talking to you from and im back filming this week. Yeah its a new beginning so will see. Its a different world now and filming is a different world and its going to be a longer process and will see how it all develops.