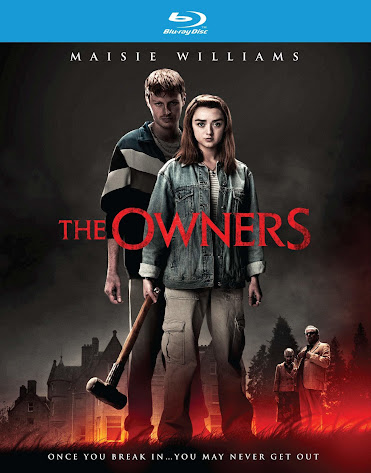 The Owners (2020) marks the feature film debut of Julius Berg and stars Game of Thrones actor Maisie Williams. But is it a brilliant start for Berg or a dud? The film follows a band of thieves that attempt to bully the code to a safe out of an elderly couples safe living in a big house. However they find something more sinister is a foot. Despite a not very original set-up, Owners starts out promising with a nearly break neck first act and is well paced and edited. Seriously, the first forty-five-fifty minutes is breathless and masterful. Sadly, the filmmakers are unable to maintain that fast pace with a second act screeches to a grinding halt. This is such a shame because I was totally engrossed only to be let down by drags in story. You can tell Berg actually cares about crafting rich characters so I do give him credit for slowing the action down to flesh out certain characters. However, I feel like this jerked me right out of a film that was earlier so enteritic and tense.

Weirdly, the film switches aspect ratio's at the end of the film, which is such an odd thing to do any further takes you out of the moment. This movie is only semi-saved by some truly stellar performances. Every single cast member is giving a honest, real performance without playing it up to Broadway levels or phoning it in.  Stand outs are Sylvester McCoy best known for his time as Doctor Who and genre legend Rita Tushingham (Hammer's Straight On Til Morning, A Taste of Honey) shine. Seriously, it was such a treat to see Rita back in genre cinema. Owners is such a frustrating film because it had such an incredible start that is anchored by amazing performances. But once the action stops dead in its tracks the film starts to unravel and frankly I found the last forty-minutes to be a chore to get through. It doesn't help that Berg does crazy stuff like dramatically switching its aspect ratio near the end of the film. This could have been an amazing feature debut but just cannot match the same energy that it does in the first half. Even the properly creepy finale doesn't make up for the slog the latter half of the movie becomes.

Picture: Owner is a newer film therefore it looks great on 1080p. Colors are well handled throughout and even darker lit scenes are crisp and vivid. Skin tones look nice and natural. Overall, a nice looking film.

Sound: Owners has a DTS 5.1 soundtrack. I was really surprised by how robust this track was. It's not amazing but I found it to be a nice complex sounding track for 5.1. Well done.

Extras: The extras include The Making of The Owner (7mins) a short featurette on the making with the director and the cast.