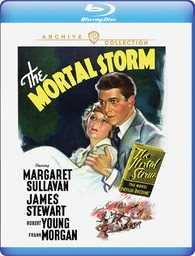 Disclaimer: Warner Archives has provided me with a copy of this film free of charge for the purposes of review. All opinions contained within are my own honest reflections.

The film takes place at the rise of Hitler. Now a once happy family is torn apart and divided by the rise the Nazi regime. Mortal Storm is that rare work of art that is just as powerful and effective today as it was in 1940. The filmmakers smartly chooses to frame the rise of fascism through the lens of a typical happy family. The idea of how ideology can greatly divide a family still plays out in many households, especially that relative that must talk politics around the Thanksgiving table. This is of course taken to the extreme  yet, its so painfully topical. The film is helmed by two time Oscar winner Frank Borzage who shockingly was not even nominated for this film, in fact Mortal Storm wasn't nominated for anything that year. Its a shame because this movie is so incredibly well directed with tense, harrowing moments brought to life by some amazing performances.
Although its a safe bet to have James Stewart play the everyman good guy caught up in this dark time in history its also the right one. Because really, I cannot think of any other Golden Age actor that so embodied American can-do spirit. He makes for the perfect viewpoint character as the actor was beloved at the time and is still regarded as of the the greatest actors of his time. The film pairs Stewart with Margaret Sullivan. The duo released a breezy Christmas movie also released in 1940 called The Shop Around the Corner. Sullivan was a truly amazing actress that had talent to spare, ease in front of the camera and beauty. She commands every scene she is in and is never over shadowed by her male counterparts. This also has excellent sporting actors like Frank Morgan giving probably his greatest performance. Irene Rich, Robert Young and Maria Ouspenskaya all shine in this as well. The Mortal Storm is a film that seems to fall through the cracks when it comes to discussing classic films from this period, yet is still harrowing and heartbreaking all these decades later. If you have slept on this movie now is the time to re-discover it because its really a well written, beautifully directed and acted film with a message that is still very useful in 2020.
Picture: Mortal Storm is been given a brand new 4k transfer using the best surviving elements. The film looks stunning with a nice crisp and clean image. Blacks are deep and well handled and the grain is very fine and consistent throughout. It always amazing me how Warner Archives can scrub these films of artifacts, scratches and dirt. I think it really celebrates this worthwhile film.

Extras: Peace on Earth (8mins) a classic Christmas short that is actually a pretty bleak Anti-war outing. This is surprising as most studios were doing pro-war propaganda shorts live action and animated. I believe this is in HD because it looks stunning with colors that pop. Another short Meet the Fleet (20mins) is the polar opposite of Peace on Earth, which is a gung-ho pro-war short.