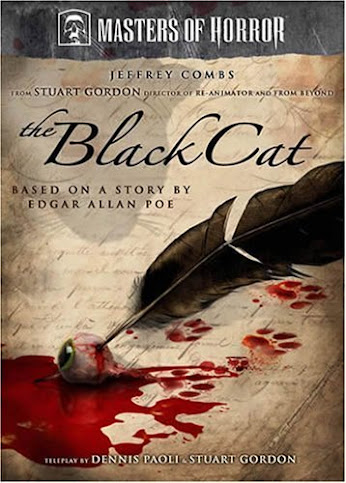 It's October and it seems fitting to dive into the film adaptations of Edgar Allan Poe. After all his work has been sending black velvet shivers down spines for decades upon decades. It seems also very fitting since sadly, we lost director Stuart Gordon earlier this year. The Black Cat was to be his second to last film (technically an episode but I consider these as their own mini-movies) as part of Mick Garris's criminally short lived Masters of Horror series. The plot sees the famous yet poverty stricken writer Edgar Allan Poe (Jeffrey Combs) searching for inspiration for a new tale of terror in order to sell a story. As his writers block becomes worse he starts to slip further and further into a nightmare world where fantasy bleeds into reality. Gordon directs this bleak tale that would easily fit nicely into Poe's darkly fragmented world of love, loss, sickness and ultimately madness. I kept this plot summary vague because I feel like the viewer should go into this as fresh as possible. Because, even this late in his career Gordon still has some nice tricks up his sleeve and injects style, class and of course his trademark sardonic humor the director was known for. It really feels like a feature that was made with the kind of zest and energy of a young-up-and-comer, not somebody who was already 60 years old. It's impressive how Gordon could take a modest budget and turn out a period film that looks and feels much bigger and more expensive in scope. I think that years in the trenches of low-to-no-budget filmmaking really served him well in making the most of what money he had. 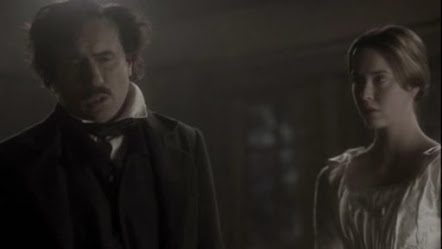 Real talk the plot isn't the most amazing or hell even that original but, its just effectively creepy and moody enough to work. The fact that this is a 60 minute outing I think also helps keep the pace lean and the action ever plowing forward to an amazing finale. But the real magic my friends, the thing that is the glue to keep this thing together is of course the actors. Gordon gave Jeffrey Comb's his breakout role in Re-Animator (1985) and fittingly, at the end of his career, also gave him, what is in my opinion is greatest role to date. Not only does Comb's look like Poe but the character actor totally disappears into the role. Masterfully Jeffrey's Poe never gets carried away even in the more over-the-top moments. Because you see, a great actor like Combs can dance around the line of hammy, but never actually cross that threshold. Elyse Levesque who you might recall from 2019's amazing Ready or Not plays Poe's wife Virginia. Like Combs Levesque breaths life to the character and does the most with the less showy role. Cat is also filled with great supporting actors like Aaron Tager who Nick fans will remember from his unnerving roles in Are You Afraid of the Dark including the infamous Laughing in the Dark episode. The Black Cat is a simply effective, darkly humorous outing.

Since its October, lets all re-watch this one, and raise a toast to Stuart Gordon and Edgar Allan Poe!