The Attic's Lost and Found: Highlighting Forgotten About Gems: The Bad Seed (1956) 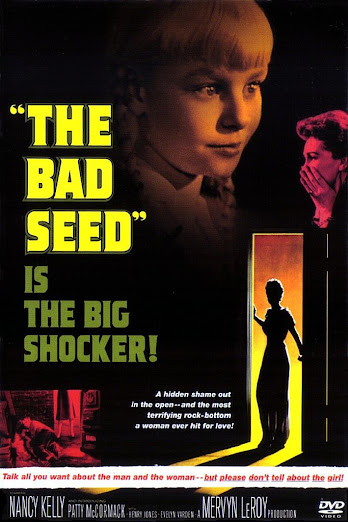 Nothing will baffle me as much as how firmly 1956's The Bad Seed has been imbedded into the pop culture zeitgeist yet, is still relatively unknown outside of cinema buffs. Based on a book of the same name by William March and later adapted for the stage, the '56 movie has often be copied and even remade but the original remains an untouchable classic. For those who never heard of this movie it revolves around a war wife named Christine (Nancy Kelly) and her angelic daughter Rhoda (Patty McCormack). But, it seems that the perfect polite little girl is hiding some very dark secrets in this early psychological thriller.

I've been a firm fan of this film for years now, yet, as tends to happens it went out of my regular rotation as newer movies and older re-issues (not to mention writing books) has pushed some films into the background. It's now October and I thought it was the perfect time to pluck my well loved copy and press it back into service. What stuck me is that the film walks this wonderful razors edge of melodrama yet it still chills me to the bone. The film wisely takes its time slowly ratcheting tension, developing characters and forming a world that feels real but slightly off. While the acting is solid (and Oscar nominated even) everybody is ever-so over-the-top which I feel not only doesn't hurt the film it helps support this slightly surreal otherworldly vibe. This is considered a cult-classic with legends like Charles Busch and John Waters as fans and, while yes, it has camp elements its harrowing and unnerving in a way few '50's films are. In fact, I'd go as far as to say it deals with taboo's even held in 2020 where seemingly anything goes.

Because at the end of the day this movie deals bluntly with a child killing other children and adults. We never see Rhoda do these evil deeds yet its so much more unsetting that we, the audience are left to imagine the horror. Yes, there is something to be said about show dont tell in film but honestly I think that not depicting the murders in this case makes it more effective. Bad Seed has it's issues but even when things start going a bit off the rails its strong theme's and premise reel you back in again. Think of it as having all the overwrought nature of a South Gothic Tennessee Williams play blended with a psychological thriller that pre-dates Psycho (1960). Not to mention it helped spawn the "evil kids" genre that is still going strong. The Bad Seed works so well because it touches on some very primal issues of Motherhood, womanhood, and family and those themes are timeless. Thats why I think that this is one of the few '50's era horror films that holds up incredibly well. It's not aliens, its not monsters, its the fear of someone small and innocent that might be evil to the core. Bad Seed forces us to deal with a real life monsters in a way that was very seldom done at the time let alone from a major studio. The film ended up being a huge hit for Warner Brothers making over double its budget at the box office and being nominated for four Oscars. If you slept on this film I beg you to give it a try. Yes, its a bit over-the-top but if you stick with it you will start to see just how disturbing it is and how it still inspires filmmakers to this day.