Streaming Review: Vampires Vs. The Bronx (2020)

The Video Attic: New Movie Review: Vampires Vs. The Bronx (2020) 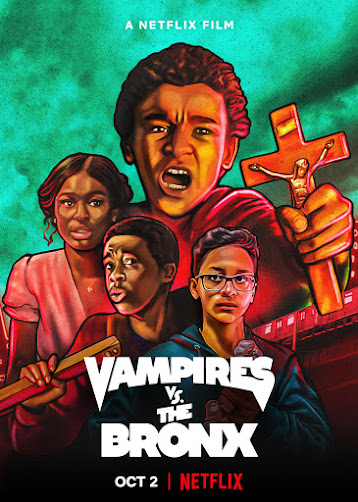 When going into a movie I avoid trailers and I try and steer clear of the hype machine as much as thats even possible whilst still maintaining a social media presents. I say this because I always want to go into a film as fresh as I can with no prior expectations or be tainted by negative reviews. So, when I say I didn't care for Vampires Vs. The Bronx its not because of wanting to go against the grain. In fact it was only after forming this review that I took a look at the RT score which as this review sits at a 94% freshness. The Netflix film starts out promising enough with likable characters and I enjoyed the references that range from subtle to the blatant. And, the thing is the film is solid from a technical standpoint but also how it neatly gets us the audience from point a-to-b-to-c. Sadly though all these talented is wasted as the film leans heavily on tired troupes. Think about every vampire cliché and its front and center. At first I thought, Oh maybe they`ll do something interesting to subvert these troupes but no, its just lazy short hand. Garlic, crosses, holy water, its all in there. And hey, everybody loves Stranger Things, why not get some lovable misfits as our central heroes? Just as the vampire's are all painfully stock, the kids feel like they've been drawn from every 80s-90s movie featuring a kiddie rag-tag crew. Speaking of timely, the Blade references feels so out of place in a 2020 movie populated by actors who were not even born when the Marvel vampire movie was released. But, again, nostalgia sells so it doesn't matter if it feels jarring and woefully out of place or ram rodded into the plot. To show I'm not a total grump I will give the film credit as it does have some legit funny moments. I can also see how its easy for audiences to get swept up into the charms as just about everybody is likable or endearing in some way.

The filmmakers do attempt to try and say something about gentrification which is one of only provocative things it does, but again, it never feels like they lampshade the issue without actually tackling it in a meaningful way. Part of me thinks that my younger self would have liked this movie more. However, having seen so many vampire movies and television shows all I see is a very lazy screenplay that skates by because familiar things are always an easier sell than something challenging or different. The best way to describe Vampires Vs. The Bronx is, its Attack the Block but sand down all the edges until its a family friendly bland film that capitalizes on the wave of nostalgia in the worst possible way. I think that homage films can be great if done right but the flip side of that is pretty un-inspired which is where Vampires Vs. The Bronx falls under. I think I am really hard on this movie because clearly the filmmakers are talented but they play everything very safe and it felt like a smash up of other better films but packaged in a way that appeals to a mass audience.