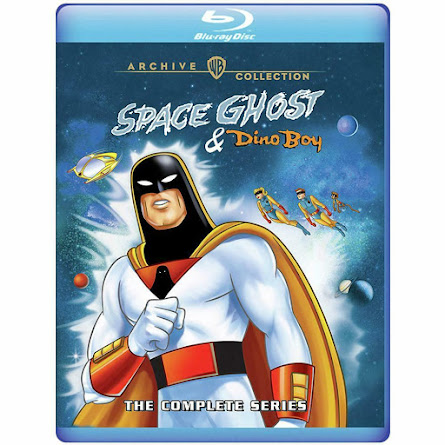 Amazingly Space Ghost is a cartoon that has cemented its legacy firmly into pop culture, having only aired twenty episodes in its original run. This is largely because of an unlikely spin off which would propel the caped wearing hero into a superstar. Cartoon Network was still trying to find its footing outside of showcasing classic cartoons. In 1993 it dipped its toes into original programing with The Moxy Show which only lasted for 24 episodes. However, in April of 1994 Cartoon Network hit gold with a late night talk show Space Ghost Coast to Coast created by Mike Lazzo.  The show was a massive hit and ran for an impressive 11 seasons and a staggering 110 episodes. In fact, I bet a lot of you only think of Coast to Coast when they think of the titular fictional character. And, you know I must admit that as somebody who was nine when Coast to Coast hit the air waves I am way more familiar with the spin-off. In fact, full disclosure before reviewing this set I had seen zero original Space Ghost episodes. But, I am a huge classic animation fan so I wanted to take care of this blind spot for once and all.

The premise is pretty simple with Space Ghost and his sidekicks Jan and Jace along with their pet monkey Blip must do battle with the forces of evil week after week. As you can tell the show isn't exactly deep but I still found most episodes to be solid if not down right entertaining. Seeing how this was produced in the '60's everything has a real charm which comes from hand drawn and painted animation. I cannot stress enough how this simply and effective technic adds personality to the stories that are admittedly hooky at best. Overall I had a lot of fun with this series and even the episodes that weren't as engaging were still good enough to keep me watching. No doubt that fans will always remember Space Ghost and Brak for their more long lasting spin-off, but I think its high time fans re-visit where it all began.

Warner Archives has been really killing it not only with their live-action catalog but with their celebrated animation IP's. Space Ghost is a must own for old school cartoon fans!

Picture: As I said the cartoon was cell based animation and this new 1080p really highlights this now sadly long lost form of art. Colors are bright and vivid with no color bleeding or blurring. Truly WA's celebrates this cartoon with a transfer that is terrific.

Extras: The extras include a nice featurette entitled Simplicity: The Life and Art of Alex Toth: As the title suggests this wonderful featurette talks about Space Ghost creator Alex Toth and the impact he had in the world of animation. A really sweet feature to include and makes a nice companion to the series.